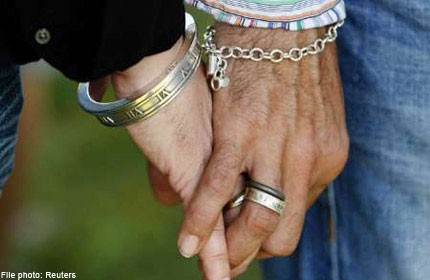 SINGAPORE - The appeals of the two separate challenges against the law that criminalises sex between men will be heard at the same time by a panel of three judges.

This was decided after 49-year-old Tan Eng Hong asked for his case to be put together with that of gay couple, Mr Gary Lim, 44, and Mr Kenneth Chee, 37.

The Court of Appeal on Thursday granted Mr Tan's application for a joint hearing, explaining that both appeals raise essentially the same issues of law.

This means that Mr Lim and Mr Chee's appeal, originally scheduled to be heard this coming Monday, will be pushed back to a later date.

Both Mr Tan and the couple contend that Section 377A of the Penal Code is unconstitutional.

Mr Tan was the first to challenge the law in 2010, after he was caught having oral sex with another man in a public toilet and charged under Section 377A.

Mr Lim and Mr Chee later filed their own challenge. The couple's case was heard by Justice Quentin Loh in February. A month later, the same judge heard Mr Tan's case. In April, Justice Loh dismissed the couple's challenge, ruling that Section 377A did not violate the Constitution. Earlier this month, he also dismissed Mr Tan's case.

On Thursday, Mr Tan's lawyer, Mr M. Ravi, argued that it was efficient for both cases to be heard together instead of the court hearing the same issues twice.

He added that if all the arguments were presented at the same time, the matter could be considered comprehensively and not in a piecemeal manner.

Separate hearings could also potentially result in different decisions on the same issues, he said.

Senior Counsel Aedit Abdullah, from the the Attorney-General's Chambers, objected to the application, arguing that the two cases involved different arguments. But Justice V. K. Rajah said that the core issues were probably similar.

The gay couple's lawyer, Senior Counsel Deborah Barker, also argued against the application saying her clients preferred not to delay the matter and wanted to limit legal costs.

But Justice Rajah said that Mr Tan could argue that his case was being delayed even longer, with Justice Andrew Phang pointing out that he had been given the green light to pursue his case before the couple filed their challenge.