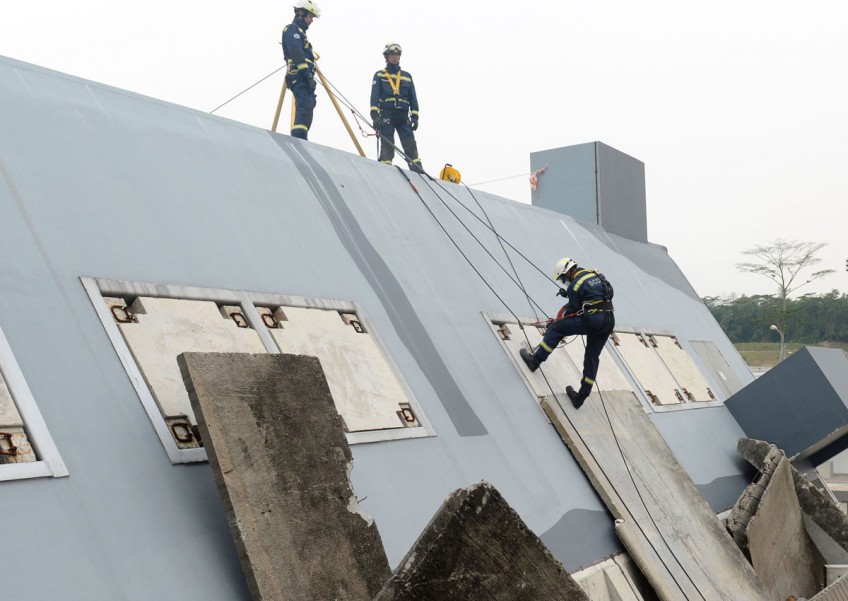 At the new training centre, officers can rappel down the side of a collapsed building.
The Straits Times

Called the Home Team Tactical Centre, the 29ha complex, about the size of 27 football fields, includes a drive-in shooting range, and mock-ups of a petrochemical plant and a collapsed building site.

The centre in Mandai Quarry Road allows training to be conducted under one roof. Previously, officers from the police and SCDF were trained at various venues including the Civil Defence Academy, Mandai Training Village and Home Team Academy.

The centre is a "significant step" towards greater collaboration between the two agencies, said Home Affairs and Law Minister K. Shanmugam at its opening ceremony.

"Over time, we will consolidate the operating and logistics bases of the (police) and SCDF specialised units," he said.

The centre completed its first phase of construction in July, and officers are expected to begin training in the next two months.

By 2018, the centre will have more facilities, including a 200m firing range and a simulated village to train officers in urban operations.

Joint training will allow specialist officers to respond better to emergencies, said Mr Shanmugam. "Both (agencies can) familiarise themselves with each other's contingency plans and capabilities."

Two or more training facilities can also be "used to simulate terrorism-related scenarios such as a multiple attack followed by a bomb explosion", he added.

At the chemical hub training facility, for instance, SCDF officers learn how to rescue and decontaminate casualties exposed to gas leaks or trapped in industrial fires.

They can practise confidence jumps by leaping from a mock ship into into a 9m-deep pool.

Within the vessel, trainers can control fires and simulate the pressures of rescue by releasing smoke and cranking up mechanical noises.

Special operations officers can also practise rappelling from height, at a building with a model of a Super Puma helicopter attached to it.

Current training sites allow officers to shoot forward only and do not allow vehicles, he said.

"Officers can drive into the range, and targets can appear on their left, right and on the second level," said the instructor.