Journey to Orchard Road of the West 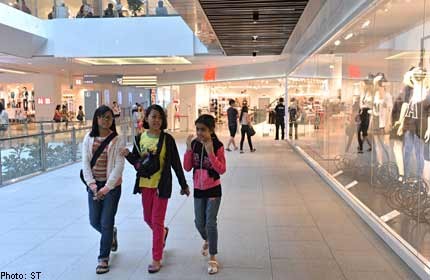 Youngsters hanging out at Jem shopping mall in Jurong East.

SINGAPORE - During peak periods, the Jurong East interchange is an unending mass of people, coming and going.

Hundreds, if not thousands, line up here, waiting for the train or bus that connects them to the rest of Singapore.

This is an area that has been on the move in recent years - just like its many commuters.

The rundown Jurong Entertainment Centre was replaced by the glitzier, cleaner JCube in April last year, while the month-old Jem, which sprouted from an empty plot of land, has been christened the "Ion Orchard of the West".

Jurong East today is a world away from its pre-1960s landscape of muddy mangroves and dank fishing ponds.

Instead, the upcoming addition of commercial towers, condominiums and even more shopping centres is drowning out past criticism that Jurong is the backwater of the country.

Some residents welcome the region's accelerated growth, saying it has been a long time coming.

"Now there's never nothing to do - every evening, I just go to JCube and watch a movie or watch people skate," said housewife Roshi Gulamrahman, 36.

She added that she and her family of seven moved from their Jurong West flat to one in Jurong East last year "just to be near all the new facilities".

Kindergarten supervisor Esther Lau, 50, said parents who come to pick up their children after school have told her they are glad they have more convenient dining options.

No longer do they need to venture downtown for a taste of Nando's or Paris Baguette; they just pop into the nearby malls.

Students such as Myra Liang, 17, love the retail choices Jurong offers. "It's the best of shopping, without the town crowds," she said.

He told The Straits Times that when he opens for business at the bus interchange, he is "greeted by crowds of workers" looking to grab a quick, affordable breakfast.

Business remains brisk throughout the day as foreign workers, students and shoppers alike stop by for $1 curry puffs and kueh, which he said are priced low to keep the customers coming.

But the rise of superstar malls has crowded out some smaller operators and frustrated some residents.

Filipino grocery mart owner Merly Salazar, 40, said business had taken a 30 per cent cut in the last six months. "The Filipinos walk past my store and go straight to the shopping centres."

At neighbouring IMM, once the area's only mall, retailers are also feeling the squeeze. "

Most of our customers are youngsters who would rather go to Jem for the variety and type of brands there," said sales assistant Ivy Wei, 28.

Housewife Eileen Tan, a Jurong East resident for the last 29 years, complained that the area was getting too claustrophobic.

Recalling the days when the MRT tracks were new and had no trains running yet, the 57-year-old said: "It was so peaceful and quiet then, like living in a village. Now it's so crowded, and you get all types of people here."

Other nostalgic residents are afraid that Jurong East will lose its unique character.

Student Teng Jingwei, 22, who used to visit the area every weekend, said she once associated Jurong East with the MPH bookstore, "giant library" and pasar malam with its Ramly burgers.

Today, the bookstore is gone, Jurong East Regional Library is "obscured" by malls and she hardly sees night markets any more.

For pastor Charlie Oh, 39, the skating rink and cinema at the Jurong Entertainment Centre, where he courted his wife, is now only a memory. The 1993 building was closed in 2008.

As residents and visitors trace and remember the region's roots, there are others who accept and even embrace these changes.

A seamstress who wanted to be known only as Miss Wang predicted that business would only improve with bigger crowds and newer buildings. "We are not worried about competition because they can't find our service in the malls," she said.

Business consultant and ice-skating enthusiast Vanessa Lee, 36, welcomes constant upgrading. Praising The Rink at JCube, she said: "The place is brighter, more open, more inviting. I think upgrading makes a reality out of what would otherwise be a memory."