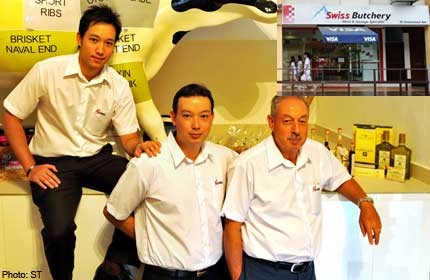 Swiss Butchery (inset) had sued Huber's Butchery for diverting away its wholesale business and loss of business opportunities. The latter was set up by Mr Ernst Huber (above, right) and sons Andre (above, left) and Ryan.

SINGAPORE - The owners of Swiss Butchery will get about $660,000 in damages for loss of business, instead of nearly $3 million, from a rival they had previously employed.

The High Court lowered the sum as it held, among other things, that the earnings foregone should be calculated based on 15 months, not five years.

The reason is that Swiss Butchery's pool of identifiable wholesale customers is small and some returned after a few months, said Justice Woo Bih Li in judgment grounds released on Thursday.

"The purpose of damages is to put the claimant back into the position in which he would have been, if the tort had not been committed," he added.

The decision is the latest development in a protracted battle that began four years ago after Mr Ernst Huber quit Swiss Butchery, where he was its managing director until 2008.

With his sons Ryan and Andre, he set up Huber's Butchery which, like Swiss, sells a wide selection of meat and produces sausages and cold cuts as well.

Swiss sued them and their company for diverting away its wholesale business as well as loss of business opportunities when Huber's got the opportunity to operate a retail outlet at the FairPrice Finest store in Bukit Timah Plaza.

After a 27-day trial, Swiss won its suit last year and a High Court assistant registrar assessed total damages at about $3 million.

This included $1.9 million for diverting Swiss' wholesale business to Huber's, and another $826,835 for the business opportunities lost from not being able to operate a retail outlet at the Bukit Timah Plaza store as well as other FairPrice supermarkets.

A key issue was the number of years to be used to compute the loss of profits through the diversion of business. Swiss' lawyer Hee Theng Fong argued for five years while Huber's Mr Johnny Cheo said it should be 15 months based on expert testimony.

Another point Justice Woo found in favour of Huber's is that Swiss had failed to show it would have taken up the opportunity to operate the Bukit Timah Plaza outlet at the material time. He noted that Huber's gave it up after less than a year.

Swiss could have stepped in, which would have shown its interest to operate in five other FairPrice outlets as well. As it failed to do so, it could not claim it lost the chance to operate in the various outlets, Justice Woo said.He reduced the $826,835 damages awarded to a nominal $1,000.

Swiss is appealing against both Justice Woo's awards.