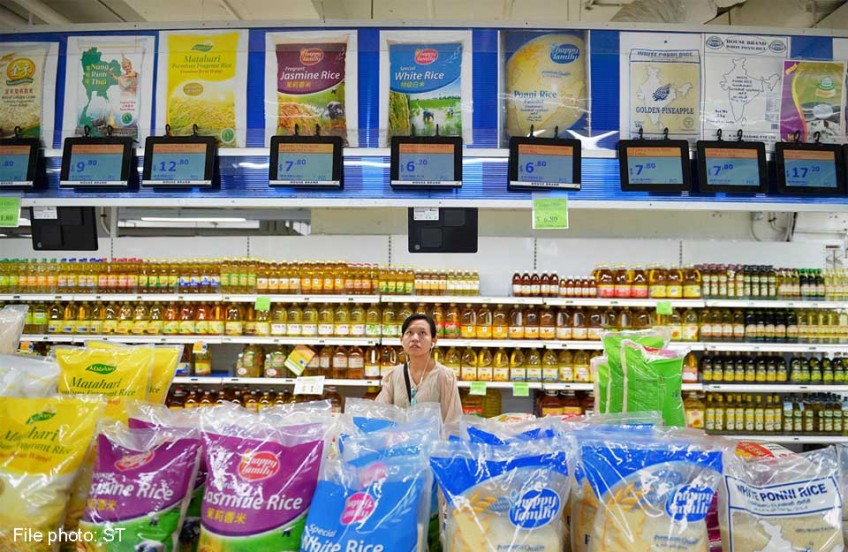 SINGAPORE - The government has cut its 2014 inflation forecast amid lower car prices and housing costs expected for the second half of the year: it now sees headline inflation coming in at the lower half of its 1.5-2.5 per cent forecast range.

But with domestic cost pressures remaining the primary source of inflation, the government reiterated that core inflation (which strips out accommodation and private road transport costs) will stay elevated at 2-3 per cent in 2014.

The impact of rising consumer prices on households varied across different income groups in the first half of this year. Worst hit were the bottom 20 per cent of households: their larger expenditure shares on food and healthcare costs meant they experienced a higher inflation rate (excluding imputed rentals on owner-occupied accommodation) at 2 per cent, compared to the middle 60 per cent income group and the richest fifth of households (both at 1.7 per cent).

CIMB and DBS economists agreed that much of the increase in food and healthcare costs was the result of ongoing restructuring efforts, where a tight labour market has pushed costs (and therefore prices) up.

Said DBS's Irvin Seah: "Restructuring is inflationary in nature, and it will affect everything. Even if we are unable to bring healthcare costs lower, we should try to moderate the pace of increase."

According to a report released by the Department of Statistics (DOS) yesterday, Singapore households experienced a 1.7 per cent inflation rate in the first half of this year compared to the same period in 2013.

This was lower than the 1.9 per cent rise seen in the preceding six months.

Excluding imputed rentals on owner-occupied accommodation, the consumer price index (CPI) went up by 1.7 per cent in H1 2014 - slightly higher than the increase of 1.5 per cent in the second half of 2013.

As for the second half of this year, the government expects headline inflation to ease, due to lower car prices and accommodation costs.

While the Monetary Authority of Singapore (MAS) and the Ministry of Trade and Industry (MTI) had said last month that car prices are likely to "add negligibly" to inflation, they now believe these will in fact exert "a slight drag" on overall inflation - given the larger-than-expected increase in vehicle certificate of entitlement (COE) quotas.

Imputed rentals on owner- occupied accommodation are projected to be lower too (instead of stabilising as earlier anticipated); economists say this reflects the large supply of newly completed housing units and the continued effects of property cooling measures.

Indeed, the drop in last month's headline inflation figure was led by private road transport costs and rentals. Consumer price inflation eased more than expected to a three-month low of 1.8 per cent in June from 2.7 per cent in May - falling far short of the market's projection of a 2.4 per cent year-on-year rise.

Private road transport costs edged up 2.8 per cent in June, which was a smaller rise compared to the 8.1 per cent surge a month earlier, largely due to the sharp correction in COE premiums in May.

Contributions from other major categories, except food, were also slightly lower.

Accommodation costs increased at a slower pace of 0.5 per cent in June compared to 0.9 per cent the month before, as imputed rentals on owner-occupied accommodation picked up more modestly.

Services inflation eased to 2.2 per cent from 2.5 per cent in May, owing to lower contributions from the cost of holiday travel, telecommunications, and medical insurance.

But food inflation came in at 3.2 per cent in June - higher than May's 3 per cent and the fastest monthly increase since January 2012 - reflecting steeper price increases of both non-cooked food items and prepared meals.

MAS core inflation inched down to 2.1 per cent in June from 2.2 per cent a month before, as the steeper increase in food prices was more than offset by the decline in services inflation.

UOB's Alvin Liew and Quek Ser Leang said they were "looking to review" their forecast, which currently stands at 2.8 per cent.

While analysts expect MAS to keep its "modest and gradual" Singapore dollar NEER (nominal effective exchange rate) appreciation stance, at least two economists have flagged the "small" possibility that this will change come October, at the next monetary policy meeting.

Said BAML's Dr Chua: "Slowing GDP growth may prompt a shift in view. GDP growth expanded just 2.1 per cent in Q2, as restructuring hurt both manufacturing and services. In our view, there is now a small probability of MAS shifting gears to a neutral bias, if the downturn intensifies and core inflation slips below 2 per cent."