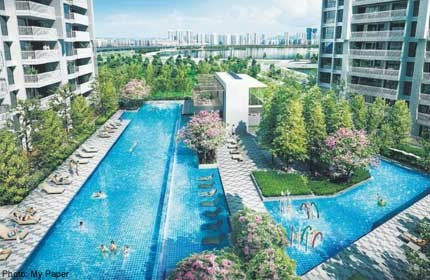 Home owners in the Jurong Lake District can expect to see the prices of their properties rise in time to come.

This is largely because of the area's emerging status as the largest commercial hub outside the Central Business District (CBD), property analysts told My Paper.

The Urban Redevelopment Authority (URA) released plans in 2008 for Jurong to become a key regional hub, as part of a move to bring jobs closer to homes.

The median resale price for private non-landed Jurong homes jumped 31.4 per cent from $808 per sq ft (psf) in April to $1,062 psf last month, according to URA data.

The area is quickly evolving into "a more vibrant place", with many developments already taking place, he explained.

"It's being marketed as the CBD of the west," he said, noting that the first hotel site in Jurong Town Hall Road was awarded to Genting Singapore last year at a record bid of $1,167 psf.

"There (will be housing) demand from people whose offices are being moved from the CBD to the new commercial towers in Jurong Gateway over the next few years," he said, adding that demand will also come from Housing Board upgraders in the area.

Ms Christine Li, head of research and consultancy at OrangeTee, said home prices in Jurong will undergo a "gradual appreciation" until more commercial developments are ready.

She said the high home prices were fuelled by demand from Singaporean investors "confident" of Jurong Lake District's future prospects.

URA data showed that 86 per cent of private-home buyers in Jurong were Singaporeans, with permanent residents and foreigners making up 9 and 5 per cent respectively, she said.

For instance, Jem mall opened in June and the new Westgate mall is set to open at the end of the year. Jurong East MRT station connects to the North-South Line as well.

Mr Choa pointed out that rejuvenation plans in nearby areas, such as Clementi and Buona Vista, have made the western side of Singapore - including Jurong - "much more attractive".

"The traditional impression that Jurong is the 'backyard' (of Singapore) no longer holds," he said. "People have become more receptive to the area and it will continue to grow in popularity."

"Even if Jurong is attractive, it's still the suburbs," he said.