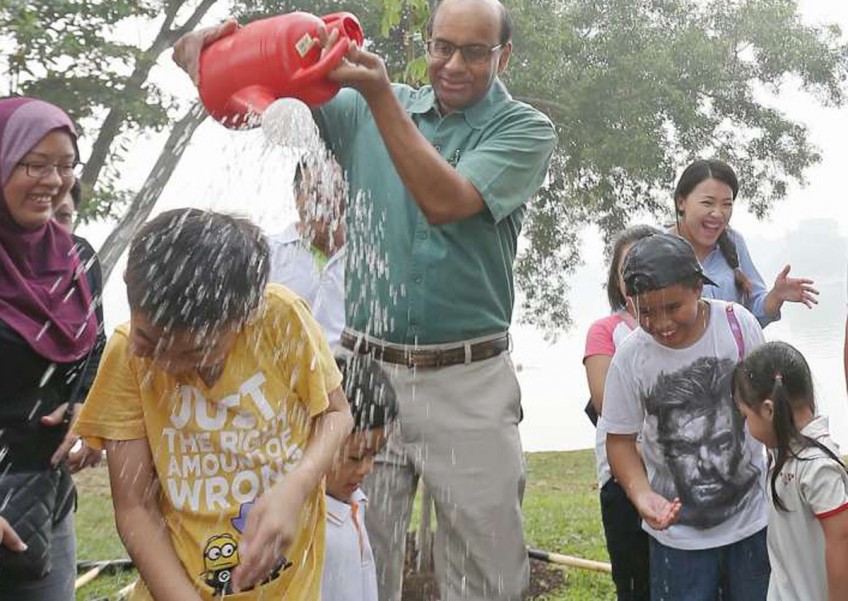 It wasn't just the trees at Jurong Lake Park that got a watering yesterday from Deputy Prime Minister Tharman Shanmugaratnam. After planting a Malayan crepe myrtle tree with others, Mr Tharman also gave Aw Jun Le, nine, a sprinkling of water.
The Straits Times

SINGAPORE - The upcoming Jurong Lake Gardens will have features such as cycling tracks, a community gardening area, and food and beverage outlets - ideas gathered during public consultations earlier this year.

Other suggestions to be implemented include the preserving of biodiversity hot spots, the planting of seasonal flowering trees and the provision of play and fitness areas.

Existing heritage structures such as pagodas and bridges in the Chinese and Japanese Gardens will be retained, the National Parks Board (NParks) said yesterday.

Over 17,700 ideas were received from April to May during public engagements such as focus groups, townhalls and online surveys.

As a result of including the most recent public feedback, construction for the west side of the 90ha gardens, which will start next year, is expected to be completed by 2018 instead of 2017 as previously announced, said NParks. "There is more work required both in design and ensuring that the residents' views and feedback are taken into account fully," Deputy Prime Minister Tharman Shanmugaratnam said at a tree-planting event at Jurong Lake Park yesterday.

"This is going to be a people's garden, so it is really great that we got so many views from the public," added Mr Tharman, who is also an MP for Jurong GRC. "It is our third national gardens - it is very important that it reflects what people want, what they like to see, what they like to feel in the gardens."

The two other national gardens are the Singapore Botanic Gardens and Gardens by the Bay.

The west side is currently Jurong Lake Park, while the central area will consist of the Chinese and Japanese Gardens. The east side will house the new Science Centre.

Parts of the west side will remain open to the public during its construction, and special pathways will let the public continue accessing the Chinese and Japanese Gardens before development works there begin. The central and east parts of the gardens will be progressively ready from 2020.

A design consultancy tender for the gardens will be called, and NParks will include the public feedback received in the tender brief.

Other ideas that may be implemented include robotic plants, vertical greenery, Wi-Fi hot spots and solar phone chargers.

Mr Tharman noted that there was a very strong public preference to retain the area's natural ambience, and that the new gardens will have "a lot more nature", such as distinctive trees and a heron island.

Plans for the Jurong Lake Gardens are part of a larger transformation of the Jurong Lake District - the largest regional hub outside the city centre. Public transport systems such as road and rail will be enhanced to support the area's development.

Lakeside resident and childcare teacher Jaslyn Goh, 43, said she is looking forward to the fitness and play corners. Said the avid jogger and mother of three: "It is good to have a playground for kids while their parents exercise, so the children won't be bored."

This article was first published on Oct 26, 2015.
Get a copy of The Straits Times or go to straitstimes.com for more stories.