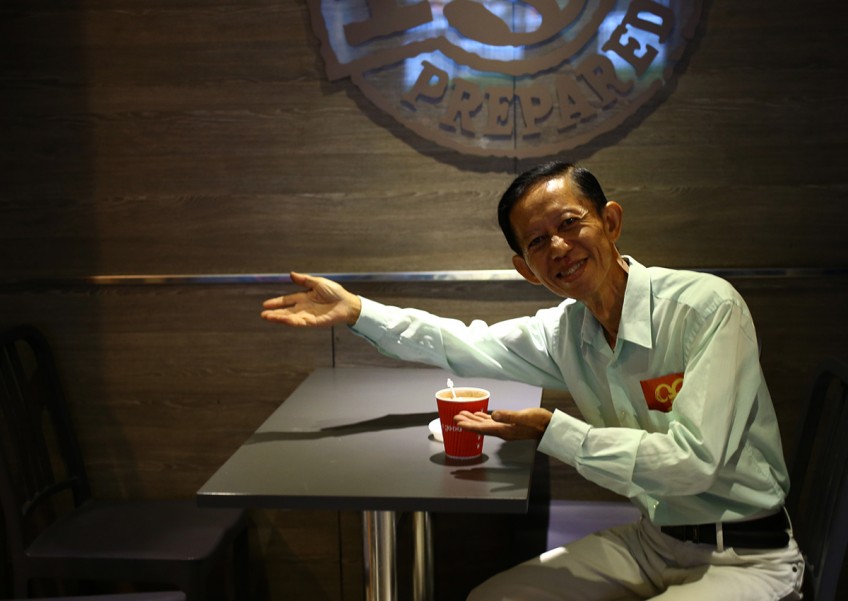 SINGLE AND AVAILABLE: Karung guni man Steven Chan advertised his search for love by putting up a 2m-high banner on one of his trucks. He has since been on two dates with different women and took one of them to KFC for a meal.
The New Paper

It was his first date with the 51-year-old hotel waitress, but Mr Steven Chan had already uttered those three words: I love you.

The 59-year-old karung guni man made headlines when he placed a 2m-high banner on one of his lorries earlier this month advertising his search for love, along with a list of criteria and his mobile phone number.

The three words that many people find hard to say are easy for Mr Chan, who has been searching for a partner for almost three years.

“I’m very straightforward and I waste no time. I dare to say it because I like her and I think she’s cute. And I think she might feel the same way about me too,” said Mr Chan in Mandarin.

Mr Chan got married in 1991, but was divorced a year later. He has a grown-up daughter, whom he has not had any contact with.

News of Mr Chan’s “advertisement” was first reported this month in Chinese evening newspaper Shin Min Daily News. Since then, he has received more than 20 calls and has been on two dates with different women.

He declined to reveal details about the women and said only that the 51-year-old, who was his second date, had more potential and “seemed to be willing” to go on another date.

When The New Paper (TNP) met him last Friday, he had already arranged a third date, this time with a 48-year-old engineer.

Speaking to TNP at the KFC outlet where he took his second date two Saturdays ago, Mr Chan said he did not want to reveal her identity, as he was concerned that it would jeopardise their budding romance.

However, he revealed that she was around his height, is “fleshy-fleshy” and that their date went “all right”.

They met at her place first, where Mr Chan helped to dismantle and dispose of a metal bed frame she had before they headed to the KFC outlet at Jelapang Road in Bukit Panjang.

Mr Chan said: “We were supposed to watch Ip Man after that, but the ticket timings clashed with (Chinese reality TV singing competition) I Am A Singer and we wanted to watch it.

“So I sent her home and we watched it at our own homes.”

Mr Chan said the ball is now in her court, as he has been waiting for her to call back to reschedule their movie date.

“I asked her to book the tickets, but I will pay. I’m the man, I must pay. How to date if you want to be so stingy,” said Mr Chan with a laugh.

He said he would try to approach more “serious” topics for their second date to see if they are compatible.

Mr Chan decided to put up the banner after he hurt his leg last March.

He was bedridden for a few weeks and although his sister came by every few days to care for him, he realised that having a partner would mean that someone could take care of him every day and in turn he would take care of her.

“I am lonely, and most evenings, it is just me, the television and the four walls,” he said.

“I have nobody to spend it with. So I want to find a girlfriend, to share my life with her.”

“People have seen the banner and heard about it, so it definitely got things going for him,” she said.

Mr Chan said he has indeed received a few prank calls and has even had people calling up to borrow money from him, but he does not mind the inconvenience in the pursuit for love.

He said: “Once I find my Miss Right, I won’t need the banner and will take it down.”