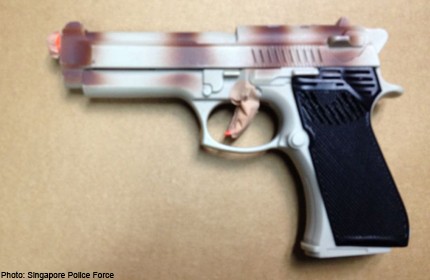 SINGAPORE - A police news release issued on Thursday stated that Varichenko Kirill, 21, had approached the victim for a cigarette. She handed him a stick and he lifted his skirt to show her a "gun" tucked into his waistband. He is said to have threatened to kill her unless she gave him her valuables. She then handed her handbag and $10 in cash. The total value of items was $110. The "gun" was found to be a toy gun.

Here is the full statement from the Singapore Police Force regarding the robbery case:

Police have arrested a 21-year-old man for Robbery within 48 hours of the offence.

On 7 Oct 2013 at about 2.55am, a female victim reported to the Police that whilst she was walking along Claymore Hill, a male suspect had approached her and requested for a cigarette stick. After the victim handed over the cigarette, the culprit lifted his shirt and showed her a gun tucked at his waistline. The culprit then demanded that the victim surrender her valuables or he would kill her. Fearing for her safety, the victim handed over her wallet and the culprit fled from the scene.

Officers from Tanglin Police Division set up a task force to quickly apprehend the suspect and solve the case. Extensive investigation and ground enquiries were conducted and officers were on vigilant lookout for the suspect, armed with a photo-fit of the culprit secured from the victim's account.

On 9 October 2013 at about 1 am, patrol officers from Tanglin Police Division spotted a suspect along Paterson Road befitting the suspect's description. The officers observed that the suspect was wearing the same attire as reported in the Claymore Hill robbery case, and upon checking, they also found a toy gun beneath his shirt. The suspect was placed under arrest.

Commander of Tanglin Police Division, Deputy Assistant Commissioner of Police (DAC) Lu Yeow Lim commended the officers for their excellent teamwork and perseverance resulting in the swift arrest of the suspect. He also advised members of public to adopt the following crime prevention measures:

They should always be wary of their surroundings, especially of suspicious persons who could be following them;

Call the Police immediately at '999' as soon as it is safe to do so.