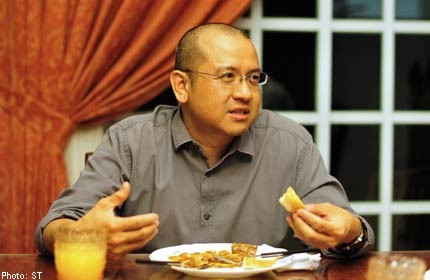 In part 1 of the interview with Our Singapore Conversation committee member Kenneth Paul Tan, he talks about his experience on the committee, how the committee felt about the Population White Paper and whether the national conversation is an "instrument for the political establishment".

Q: What did your work on the OSC committee involve?

A lot of the hard labour was done by the secretariat. But we attended committee meetings and were asked to advise on various aspects of the OSC process and outcomes. We were also expected to participate in as many forum sessions throughout the year as possible.

People often ask if anything really surprising was said during these forums. Many of the issues raised I knew about cerebrally of course, but I really value hearing the concerns being played out in stories that were very personal. When people became confident to share their stories authentically, you get to hear the reality and depth of these concerns in more nuanced tones. Otherwise, the concerns remain abstract.

Q: What were some decisions the committee had to make?

The final report had a lot of editorial input from us: What to call it, what look it should have, whether the voices we heard were as accurately and authentically reflected in the writing. We did not want it to be a policy document but a faithful record of the concerns and aspirations of Singaporeans that could guide actual policymaking.

We refined the questions of the survey that was done. We thought about what the implications of asking questions in a certain way might be. So we had that type of input, too, in the survey process.

In the transition into phase two of the OSC, the secretariat also presented to us their efforts at codifying the dialogues into 12 perspectives, to see if they matched what we heard on the ground.

Q: Was there any that attracted a bit more discussion?

Yes. It's a very vocal committee that made many suggestions, sometimes difficult ones. The secretariat was quite responsive to the interventions of the committee. The fiercest intervention, though, came during the announcement of the White Paper on Population in January. I remember at that committee meeting, some members felt let down.

Here you had a process of engagement with citizens. You were trying to make it authentic and to get citizens to participate, make their views known, and then in some way, have these views fed into policies. We hoped people would see the value of this and that it would become a norm of public participation.

Some committee members had obviously pulled in a lot of their own networks, contacts, friends and colleagues to get involved in this process. These people then came back and asked them: "What is this about?" So they found it difficult to explain.

The worry is that people who had invested time and effort into the process might think decisions had been made in a separate process in an almost cavalier way.

That was one of the moments when our committee discussions felt somewhat awkward.

Q: What was the response to members' concerns?

We talked about it. Minister Heng Swee Keat explained to us what the process was for the White Paper. I don't think everybody was necessarily convinced by the explanation, but we moved on. The process of engagement was important and we were committed to it nonetheless.

Q: What would have been the preferred approach for committee members? To postpone the White Paper until after the OSC?

It would have been better to dovetail the two. Not that the White Paper has to be the report of the OSC. Certainly it was not meant to be one. But it should be informed by it. The OSC was an extraordinary exercise lasting one year. It doesn't happen all the time. So honour that process and make people feel that their investment of time and effort actually counted for something.

I don't say that the White Paper destroyed the credibility of OSC. That would be overstating it. But it made the job a bit harder to do. And it was already quite difficult to begin with.

I don't want to over-dramatise the moment. I remember thinking to myself: "Some people seem to feel betrayed by this." But it wasn't an angry time. It wasn't a moment of crisis. It was just one of the more memorable episodes in the process.

Q: You also wrote about the OSC starting on the wrong foot because the opposition and obvious government critics were not invited to be part of the committee.

Yes, I think it could have been more inclusive by bringing in people who were a little further from the mainstream. But I understand why. While you want a diversity of views, you might also want a reasonable amount of consensus so the process can start.

Q: In the end, would you say that the OSC avoided being labelled as what you described in an article as "an instrument for the political establishment"?

For some, that's always going to be the case. And it's not entirely untrue, in the sense that the OSC is many things. It cannot avoid being that, too. I saw it as that, but also an opportunity for people who are not necessarily establishment to come in, interact, persuade, collaborate and make the changes they might want to make but from within an open enough space that allows for our view of what is good for Singapore to be shaped.

And to be quite honest, I was a little surprised at just how civil, tolerant, and open we were capable of being at these forums.

I'm slightly reluctant to think of this as a policy process in the sense of collecting input and feeding it to the policy machine to produce good policies at the end of the year-long process. I know there is an expectation that something like that will happen.

To me the value of the OSC was actually in building capacity more than providing answers for policymakers. The skills and talents required to act in public spaces as responsible citizens - engaging one another, debating, learning about existing policies and their rationale, and so on.

These things are not actually easy to do. There is, for instance, anxiety around being in a space with strangers and being held accountable for your views. This requires confidence, the ability to speak courageously, empathetically, and convincingly. The ability to make arguments and judgments that are supported with evidence.

These are not necessarily natural abilities. You learn to become active citizens. And you learn this not by reading textbooks or theory, but by doing it.

If all that the OSC was meant to do was to create good policies for the present, then it might not be the best way or the best use of our resources. It's the investment into citizen skill-building that is more important, I think.

Q: So what are those citizens going to be doing henceforth?

Hopefully, there will be more spinoffs. Various groups - youths, and so on - having their own conversations, and conversations becoming the norm. Of course, I don't mean that after this year there will be a flowering of forums everywhere. These things are built over time.

What should happen is that people begin to develop comfort in talking to one another. The OSC is a good start. But soon, we will need to have conversations on specific issues organised around smaller communities of interests and concerns.

I'll mention one more important contribution of the OSC - giving us opportunities for shared storytelling.

What we can no longer have, I think, is one national narrative that everyone has to relate to. That has become unrealistic in a cosmopolitan city with sophisticated citizens. More important now is the telling of personal narratives that connect - and sometimes disconnect - in the moments of sharing. Textured stories that we weave into one another in a national fabric that is always in the making.

When we come together into these kinds of spaces and tell each other our life stories and have them inter-mingled, that becomes I think a much more realistic and inclusive basis for thinking about what it means to be Singaporeans.