'The kids still want to see their mother': Husband of woman who died protecting toddler son in SLE accident

Family members teared up as the husband of the 38-year-old woman who died shielding her 3-year-old toddler during an accident on SLE on Father's Day (Jun 18) told his sons that their mother had passed away, despite them crying to see her.

The MVP the family was in had struck a road barrier, causing the deceased to get flung out while she was carrying the couple's youngest son, reported Lianhe Wanbao via Lianhe Zaobao.

The woman was pronounced dead at the scene, while her husband and their three sons aged 3, 6 and 9 were conveyed to a hospital for treatment.

After the accident, the 37-year-old widower was hospitalised in Tan Tock Seng Hospital and placed under observation, after complaining of pain in his back.

His eldest and second son had suffered mild injuries and were rushed to KK Women's and Children's Hospital for treatment. 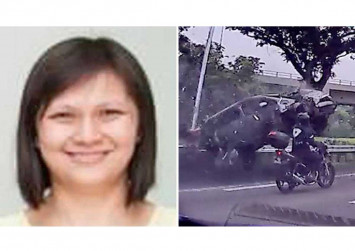 The youngest child had suffered more serious injuries on his head and back, and is warded in Khoo Teck Puat Hospital for observation.

It is understood that he is out of immediate danger and all the conditions of the subjects are stable.

When reporters contacted the man yesterday, he said that he had been discharged on Monday afternoon.

He said that although he has yet to recover fully, his children need him now, and he had to be discharged to look after them.

The grieving husband also added that he did not wish to revisit the painful accident and his only consolation was that his three children are safe.

He also said that after getting discharged yesterday, he broke the tragic news to his children and family members: His beloved wife and mother to his children had passed away and was never coming back.

"The kids kept crying and asked to see their mother."