A 35-year-old man was taken injured to hospital after he was hit by a glass bottle falling from height on Tuesday evening.

The high-rise killer litter incident happened at Block 227A Sumang Lane in Punggol.

The police said they were alerted at about 6.30pm to a case of rash act causing hurt, and the victim was taken to Changi General Hospital.

The New Paper understands that the man, who was at the foot of the block, was struck on the head by a beer bottle inside a plastic bag, which also contained some tissue paper and a receipt.

Chinese language newspaper Shin Min Daily News, quoting an eyewitness, reported that the victim was chatting with a group of friends when the bottle hit him on the head, which started bleeding.

The wound was about 4cm long, and someone called for an ambulance immediately. The extent of his injury is not known.

When TNP spoke to several residents at the 17-storey block yesterday afternoon, most of them were not aware of the incident and had not noticed or heard anything suspicious.

Those who knew about it mostly found out through the neighbourhood's WhatsApp chat group or when police officers knocked on their doors to try to find the culprit and seek more information.

A 29-year-old resident, who lives on the third storey, said he saw two police cars and a number of officers gathering at the foot of the block at 7pm.

The resident, who declined to give his name, said the police stayed for two hours, during which they took photographs of the area.

An eighth-storey resident, who wanted to be known only as Firdaus, said he found out about the incident when the police spoke to him on Tuesday night.

He said: "They were knocking on the other units as well and asked if we had heard about the incident or if we knew about similar incidents in the area."

Residents who spoke to Shin Min said the problem of high-rise littering in the block started three years ago.

In recent times, items such as water bottles, takeaway food containers and garbage bags had been thrown from height.

They said that such incidents had been happening more frequently, sometimes in the wee hours of the morning.

But no one seemed to know who the likely culprit might be.

The residents also told Shin Min that gatherings were common on the garden deck on the 13th storey, where the groups of people would sometimes leave without clearing their glass bottles and rubbish.

A retiree, Mr Chen Jun Ping, 73, told Shin Min that the police collected the pieces of broken glass and took them away when they left at around 9pm.

There have been incidents of killer litter through the years, with some resulting in injuries or even death.

In August last year, a 73-year-old man died from his injuries after being struck by a glass bottle. 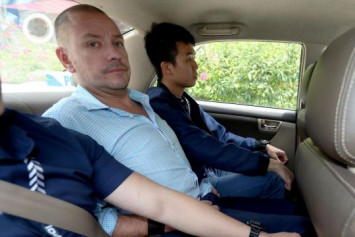 Mr Nasiari Sunee, a delivery driver, was attending the housewarming party of a relative in the barbecue pit area of the Spottiswoode 18 condominium at the time.

He was taken to Singapore General Hospital, where he died the next morning.

A 47-year-old Australian man, Andrew Gosling, was charged with causing death by rash act after surrendering to the police 10 days after the incident.

The charge was later upgraded to causing grievous hurt with an instrument, which carries a jail term of up to 15 years, a fine and/ or caning.

Last December, Gosling was hit with a new charge of causing hurt to a woman in the same incident, with the new offence described as being "religiously aggravated".

Gosling had allegedly thrown a glass wine bottle from the seventh storey towards a table near the barbecue area on the fifth storey.

The bottle is said to have struck the woman, identified as Ms Manisah, on her right shoulder, and also hit Mr Nasiari's head, causing a skull fracture that led to his death.

Anyone convicted of an offence that is religiously aggravated may face a higher sentence of 1½ times the amount of punishment originally meted out.