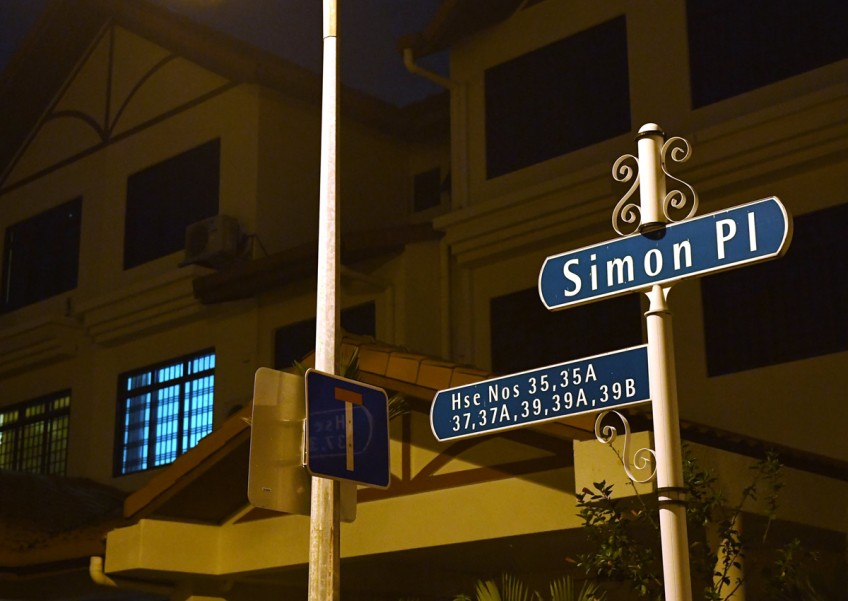 Two locally transmitted cases of the Zika virus have been confirmed at Simon Place.
The Straits Times

When Simon Place residents Madam Yeoh and Mr Lim were told they had Zika on Tuesday, their first thoughts were about their neighbours.

"I know there are two pregnant mothers living nearby and I didn't want them to be in danger," said Madam Yeoh.

The positive Zika diagnosis for the husband and wife, whose full names were not given, meant they formed a Zika cluster - the first of the year.

The couple live in a four-storey terrace house in Kovan.

By yesterday, the National Environment Agency had inspected 234 of 400 premises in the area, and destroyed 10 mosquito breeding grounds.

Fogging was used to help kill the Aedes mosquitoes, which also spread dengue.

Zika results in mild cold-like symptoms but can be dangerous for unborn foetuses.

That is why Madam Yeoh, 42, and her 48-year-old husband, spent an hour warning residents that they had Zika.

The first person they told was their pregnant next-door neighbour. Said Madam Yeoh: "We advised them to move out for the next few days, and they did. I was also very touched that everyone was very kind and concerned about us."

They had developed rashes and fever last week and visited a 24-hour clinic in Hougang on March 23. They were advised to go for a blood test, which they did at an Outram Park polyclinic.

The symptoms have nowgone and Madam Yeoh's pregnant neighbour even visited her yesterday.

The self-employed couplewere in Japan in February for a holiday and initially felt they may have contracted the virus there.

Their doctor said they were probably bitten around two weeks ago, after their trip.

"We could have been bitten while taking our two poodles for a walk," said Madam Yeoh.

NEA officers checked their home on Tuesday but did not find any signs of mosquito breeding, she said.

Residents at Simon Place say mosquitoes are an issue.

Retiree Paramaes Govin, 60, who lives in a terrace house, said: "Fallen leaves and seeds from the trees clog the gutters on the roof."

Aljunied GRC MP Sylvia Lim visited the area yesterday morning. She said: "Residents living in this area are quite used to clusters of mosquito-borne diseases - in the last few years we've had dengue outbreaks. So they already know what to do and how to protect themselves."

Infectious diseases specialist Leong Hoe Nam from Mount Elizabeth Novena Hospital said the new cluster is not cause for alarm, as the cases were from the same household.

There have also been just six other isolated Zika cases this year, after the last cluster was closed in December.