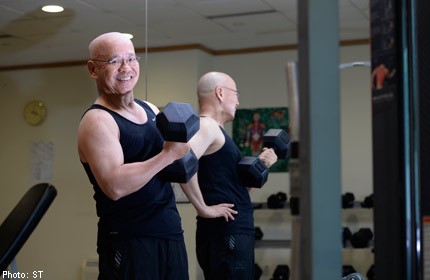 SINGAPORE - Dr William Wan knows he is much vilified on social media.

Critics, accusing him of "Nato" (No Action, Talk Only), say he should get off his high horse and do some real work.

They mock the possibility that one man can make a dent on an increasingly uncivil society, marked by the latest result of the Graciousness Index - an annual study that tracks the perception and experience of kindness and graciousness in Singapore - which hit a five-year low this year.

The general secretary of the Singapore Kindness Movement (SKM), who had his contract renewed recently for the third year, smiles it away. But his smile betrays the barest glint of teeth.

Make no mistake, he means business. Dr Wan, 66, does not see his movement as a benign cheerleader, but a force to shape positive social norms, collaboratively but cogently. "For Singapore to be a gracious society, it takes a lot more than a fuzzy, cuddly cheerleader asking people to smile and be kind. This has to be undergirded by collective political and social will to say this is the society we want, backed by good laws and enforcement," says the fervent believer in tough love.

That is why the SKM is calling for ramped-up penalties and enforcement for those who flout social rules. It has joined hands with the Public Hygiene Council to curb littering and the National Environment Agency (NEA) to coax tray returns at hawker centres.

For the record, he also supports mandatory arbitration for disputes between neighbours, stiffer protection for battered women and tougher legislation against maid abuse. "I don't believe in capital punishment but I'm for punishment. We don't have to be harsh and cruel to be determined and forceful in helping people to do the right thing," he adds unequivocally.

He encourages his 15-strong secretariat and 60 members to be trained by the NEA as citizen volunteers given the authority to ask litterbugs to bin their trash and to take down their particulars, if they refuse. So far, 10 have been trained, himself included.

Interestingly, the serial church pastor and theologian is keen to debunk the common misconception of kindness as softness, being nice, or turning the other cheek.

"Neither is kindness about: 'Oh, let's be kind, let's not be negative and critical.' No, that's not what it is. I think we can be constructively critical of something that's not right, graciously so, be very tough about it and seek changes," he continues.

Take littering as an example.

"It's terrible that our society has become so badly littered. And (Public Hygiene Council chairman) Liak Teng Lit is right; we have a cleaned city, not a clean city. In fact, we are the ones who advocate stronger enforcement. Why? Because it would be unkind to allow people to litter and cause diseases to spread. So we then offer ourselves to be volunteers to enforce the laws. Being kind is also to be tough about things that are not right.

"Some take the view that I'm the good cop, Mr Liak's the bad cop. But I'm still a cop. That means I want to stand up and say this is wrong, but I will say it in a nice way. And if you're not going to listen, then I've to find a way to enforce it."

The first two years when he took over, the SKM focused on encouraging people to take time to be kind and say thanks. But this year, he wants to take it up a notch and elevate the understanding of kindness.

He's also making the movement less "campaign-oriented" and more of a "facilitator" which supports ground-up initiatives.

His personal definition of kindness is: Doing the right thing for the right reason. He quotes in part his favourite writer and Christian theologian C. S. Lewis: "You can be good for the mere sake of goodness...You can do a kind action when you are not feeling kind and when it gives you no pleasure, simply because kindness is right."

But even he acknowledges that that may be too high-minded.

"Until we get there, most of us will be asking: 'What's in it for me?'" he says realistically.

So these days, he goes around schools, civic groups, religious organisations making a case for the ROI (Returns On Investment) of being kind. It goes something like this: Kindness and compassion increases the production of the hormone oxytoxin, which is also produced when people are in love, cuddle, or connect with each other.

It has been shown to heal wounds, protect the heart from damage, slow down the ageing process, and reduce blood pressure.

He concludes: "A hug a day keeps the cardiologist away."

He knows he's up against a complex social dynamic, what with the widening income gap and more foreigners here.

The norms of doing the right thing are the same, he maintains, no matter where one comes from.

"It's the practice of it that is sometimes not there," he says. He always takes pains to correct the perception that certain foreigners add to the lack of social graces here. In fact, he says many foreigners go out of their way to make life more pleasant here.

SKM has at least a dozen foreign volunteers who hail from China, India and Vietnam. There is also a Japanese group called Green Bird Singapore, a local offshoot of a Tokyo-based non-profit body, that goes around places such as East Coast Park and Little India picking up litter once a month.

Practising what you preach

He knows all about kindness, having been both at the giving and receiving ends. He was the product of a large blended family, when a widower married a widow.

His late father was a trader who never found the gumption to work again after his business failed. His mother toiled round the clock as a warehouse cleaner and hawker to support them all.

In Secondary 1, he became a Christian, started Bartley Christian Church with a bunch of friends, moved out to a rented room and gave tuition to support himself. At 17, after finishing at Bartley Secondary, he attended Singapore Bible College, pastored a congregation and taught at a private school. On the side, he signed up for the A levels a few months before the exams, crammed and qualified to study law at University of Singapore.

As a third-year law student, he got married. A year later, he graduated, bagging a Second Upper, and started his own practice the day he was called to the Bar. He set up a number of charities, including the Prison Fellowship Singapore, which supports prison inmates and their families, and preached on weekends.

In 1975, he left for Canada, returning with master's degrees in religion and theology three years later. He taught at the Discipleship Training Centre here, pastored a church, and was founding secretary-general of a national Christian movement. But burnout from juggling three jobs saw him returning to Ottawa, Canada, in 1981, where he did a PhD in constitutional law, served as vice-president of Toronto's Tyndale University College and headed a cluster of 75 churches in Ottawa.

After 10 years in Canada, he spent another six years in Washington DC, where he was co-senior pastor of a downtown church which integrated blacks, whites and Asians. His successful merging of the congregation made the front page of the Washington Post on Easter Sunday in 1994.

He returned here in 1996 to pastor Bartley Christian Church, which had grown to 2,000 members, for the second time. But a leadership dispute in 1998 led to an exodus by him and several hundred members. Disillusioned, he returned to law at Kelvin Chia Partnership in 1999, aged 52. He did civil litigation and pro bono work, then retired as a senior partner on his 60th birthday in 2007.

That was followed by two years in Nebraska in the US being trained in psychometric analysis, then returning to head the psychometric assessment consultancy,

Talent Plus, here. In 2011, on the cusp of another bid at retirement so he could spend more time with his three grown children and three grandchildren in North America, he was invited to run SKM. He welcomed it as an "opportunity to do something for Singapore", after having lived over two decades abroad.

His old schoolmate Joseph John, 65, now a counsellor, notes that leading the SKM at this stage in life may not have been "an altogether wise decision".

"But this is vintage William at work, going where few others have gone before. He has taken on a task that even angels would fain take on but his decision to do so is marked by a strong conviction, forged over many years of working with different sorts of individuals, that despite the many layers of self-interest, there is in all of us a desire to respond with kindness when we have been touched by kindness."

Indeed, Dr Wan believes there are no truly lost causes. This is what made him employ former convicts as clerks in his law firm.

He defended payroll robber Tony Ng, now a 61-year-old businessman, for free and housed him in his home, while preparing for the court trial 40 years ago. Says Mr Ng: "I was touched by his trust in me, inviting a total stranger, and a criminal, to stay in his home."

Another unlikely candidate Dr Wan brought on to his church staff is former drug addict Luke Thuraisingham, 60, now pastor of Hope Presbyterian Church. The latter recounts: "He saw the good in me and felt I could pastor a church... That's so him, changing one life at a time."

But Dr Wan himself says his own motivator is the kindness shown to him by others when he was helpless. He relates a particularly painful time when his daughter Li-Lynn dropped out of school and left home at 16. When she resurfaced at 19, she was pregnant and on drugs. But a kind family friend, Becky Moi, took her in and taught her pottery, despite her many problems.

"We were not able to even talk to our daughter but Becky was able to communicate with her and she learnt much from her," he recounts.

That led to Li-Lynn turning around and eventually attending community college with her two-year-old in tow. Today Li-Lynn, 37, has a history PhD and is professional potter in Canada.

His other children, Le-Ann, 40, an art therapist, and Le-Ben, 32, a geneticist and psychiatrist, live in the US.

The grandfather, who lifts weights every other day and won a Council for Third Age's Active Agers Award in 2011, still lives fully, gratefully and daringly. He has a long bucket list. Items ticked off include sky diving, snipe racing, and scuba diving. Outstanding items include bungee jumping.

And of course trudging on, nudging Singapore into a more gracious society, which he works 11-hour days on, knowing that his goal may be reached well beyond this lifetime.