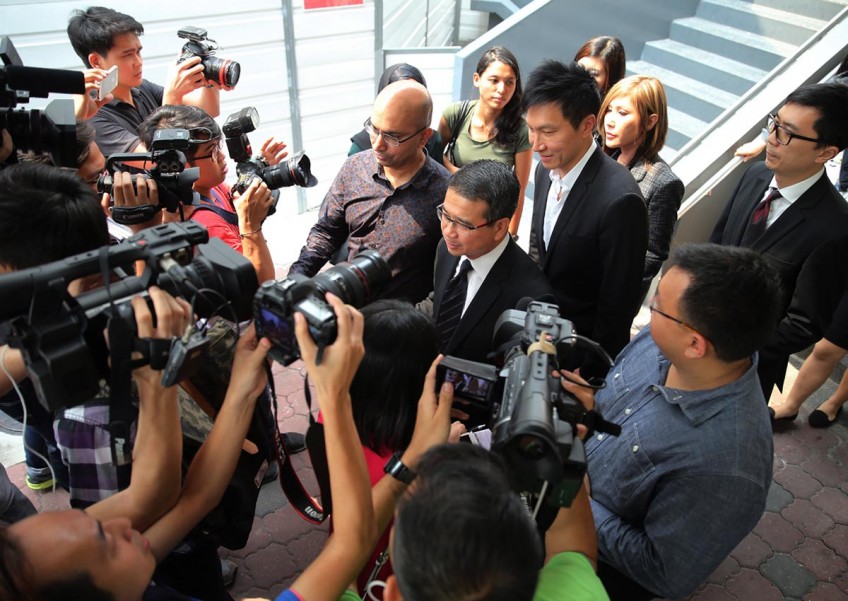 Kong Hee exaggerated the success of his wife's music career, was in control of the supposedly independent firm that managed her, and played a key part in misleading auditors and lawyers.

And critically, it was his approval and guidance that was sought by his five accomplices in their misuse of City Harvest Church (CHC) funds.

This was what Judge See Kee Oon said of Kong, the church's founder, in his 270-page written judgment obtained by The Straits Times yesterday - making clear that it was the 51-year-old who was first and foremost behind the scandal.

Of this amount, some $24 million was invested in sham bonds to bankroll Ms Ho Yeow Sun's pop music career, as part of the Crossover project - Kong's brainchild to spread his church's message through popular culture.

The project was initially funded directly by the church, but that all changed in January 2003 when church member Roland Poon alleged that the church's building fund had been used to finance Ms Ho's burgeoning music career.

Mr Poon would go on to retract the allegations and apologise.

At the time, the judge pointed out, Kong had "emphatically" insisted that no church funds were ever used - in his own words "not a single cent" - to support his wife's music career and boost her sales.

"But this is again flatly contradicted by the evidence that emerged at the trial," wrote the judge, one of several contradictions he highlighted between Kong's testimony and the facts.

To avoid misconceptions that Ms Ho's music career was "not real" and CHC money was spent in a "cavalier and flippant" manner to promote it, it was Kong who decided on the need to be discreet on how the church went about funding the Crossover.

"Kong Hee took overall charge of the Crossover and all matters pertaining to the budgeting and financing of the project came under his supervision and instruction," wrote the judge.

Xtron was set up by three of the accused to manage Ms Ho. It had its own directors, but it was Kong alone who made decisions regarding his wife's music career and how much to spend.

Kong's claim that he had "significant influence" over Xtron but not control over it was a matter of semantics, ruled the judge.

"The essential point is simply that he never believed that the Xtron directors presented any impediment to his ability to do what he wished with Xtron."

And that included control of the money Xtron received when the church "invested" millions into bonds issued by the firm.

The judge agreed with the prosecution that the bonds were a sham and simply a way through which CHC could fund Ms Ho's pop music.

"I am satisfied beyond a reasonable doubt that Kong Hee did not believe that the Xtron bonds were genuine investments," he wrote.

He also dismissed Kong's defence that he regularly consulted auditors and lawyers, with no red flags raised.

"But there was an important gap in their knowledge, which was the true nature of the relationship between CHC and Xtron."

He ruled that Kong contributed in misleading auditors.

Judge See noted that Kong would not have been able to act alone, and "orchestrate, monitor and manage every move".

His five accomplices had also knowingly committed the crimes and were "willing and eager" to be led by Kong, he wrote.

But he reserved his strongest words for the church founder, who was found guilty of three counts of criminal breach of trust.

He described Kong as having a tendency to embellish or exaggerate.

The judge said Kong could not have been ignorant that his wife did not actually appear on "official" Chinese government-issued first day covers, or sing the official Special Olympics theme song - all of which he claimed she did.

And as to Kong's claims that he was not an expert in legal matters, Judge See said one did not have to be such an expert "to appreciate certain fundamental aspects of honesty, truth and integrity".

The judge will hand down sentences on Nov 20 at the earliest.