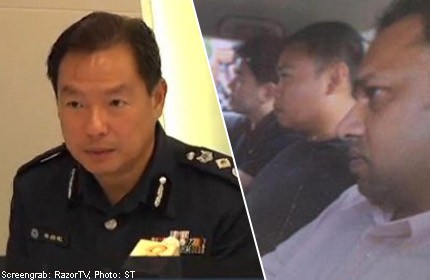 Today is a sad day for the Police. Today, we have arrested a murder suspect who is also a policeman.

The Police have brought into custody Iskandar Bin Rahmat (Singaporean male, 34 years), a police officer attached to Bedok Police Division. He will be charged for the brutal murders of Tan Boon Sin and his son Tan Chee Heong that happened three days ago at Hillside Drive.

I cannot remember the last time a murder suspect was also a police officer. You may have seen this kind of thing depicted in the movies and on TV, but when it happens for real, it hits you like a freight train.

After the shocking events of Wednesday afternoon, police investigators worked tirelessly around the clock to, first, identity the perpetrator, and then, to hunt him down.

When I was first told that the murder suspect could be one of our own, my initial reaction was disbelief, swiftly followed by anger and anguish.

This was the same gamut of emotions police investigators had to deal with in the last few days as they pursued the suspect. The fact that the suspect is a police officer gave my investigators even greater resolve and determination to solve this case. I commend them for going about their duties in a thoroughly professional manner, and for being ultimately successful in capturing their target.

We have now captured Officer Iskandar and we will prosecute him to the maximum extent. He is a murder suspect and will eventually receive just desserts for the heinous crime that he is accused of committing.

Officer Iskandar's fall from grace has also brought dishonour to the 10,000 other police officers who dedicate themselves every day to protecting others, and who routinely risk their own safety to preserve those of others.

Tragically, Tan Boon Sin and Tan Chee Heong are dead. And untold grief has been brought upon their families and loved ones. Their loss can never ever be made good.

I wish that there is something the Police can do to lessen their anger and sorrow. I wish that I can turn back the clock and undo this great misfortune that has befallen upon the Tan family. But I know that no amount of commiseration or regret will lessen the hurt. All we can do is to bring the culpable to justice, and to mourn with the rest of Singapore the senseless loss of two innocent lives.

I expect that after this press conference, newspapers, TV and radio, the blogosphere, and coffee shops and sitting rooms up and down the country will reverberate with talk, comment and opinion about this tragic incident. Most of it will be an outcry critical of the police, questioning the quality and integrity of police officers.

Some of it will be unthinking and plainly unfair. And still some will be deliberately malicious.

Even as we investigate the murders, the Police also look to find out what has led an individual who has sworn to uphold the law to now stand accused of breaking it in the most grievous way.

Our police force and every policeman and policewoman is tarred by the actions of this single officer. This is unfortunate, but my officers and I will take every criticism in our stride.

The public's trust in the Police is the only reason why we are able to keep Singapore as safe as it is. This trust is hard-earned and must never be broken. And we will not allow this tragedy to adversely affect the strong bonds that we share with the communities that we protect.

We are a force for the nation. And we will not be distracted, by the current unfortunate event, from continuing with our work of safeguarding Singapore.