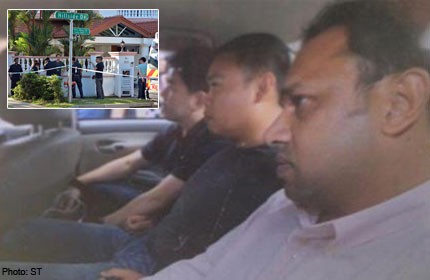 SINGAPORE -  A press conference was convened about the Kovan double murders which happened on Wednesday afternoon.

They revealed that the 34-year-old suspect is police officer Iskandar bin Rahmat who was with Bedok police station. He was a Senior Staff Sergeant and was in the police force for 14 years.

Mr Tan Boon Sin, 67, was discovered in his home in Hillside Drive, near Upper Serangoon Road while the body of his son, Tan Chee Heong, 42, was found earlier about 1km away outside Kovan MRT station.

According to eyewitnesses a Toyota Camry had dragged the body of the younger Mr Tan along Upper Serangoon Road before the body was dislodged.

It was revealed during the press conference that the elder victim, Tan Boon Sin, had made a police report for theft at Bedok police station in Nov 2012.

Iskandar, who was the duty officer when the theft report was made, was also the initial investigating officer, but he was later removed from the case.

The suspect left Singapore for Malaysia on a scooter on the same day of the alleged murders.

He was arrested at a Danga Bay restaurant in Johor, on Friday night at about 11.30pm. He has since been extradited to Singapore and will be taken to Cantonment police station at around noon.

The police added that he was in debt, but it did not involve gambling and instead was due to domestic matters.

"Today is a sad day for the police", acknowledged Police Commissioner Ng. He added that the suspect will be prosecuted to the full extent of the law.