Kovan double murder: Where is the murder weapon? 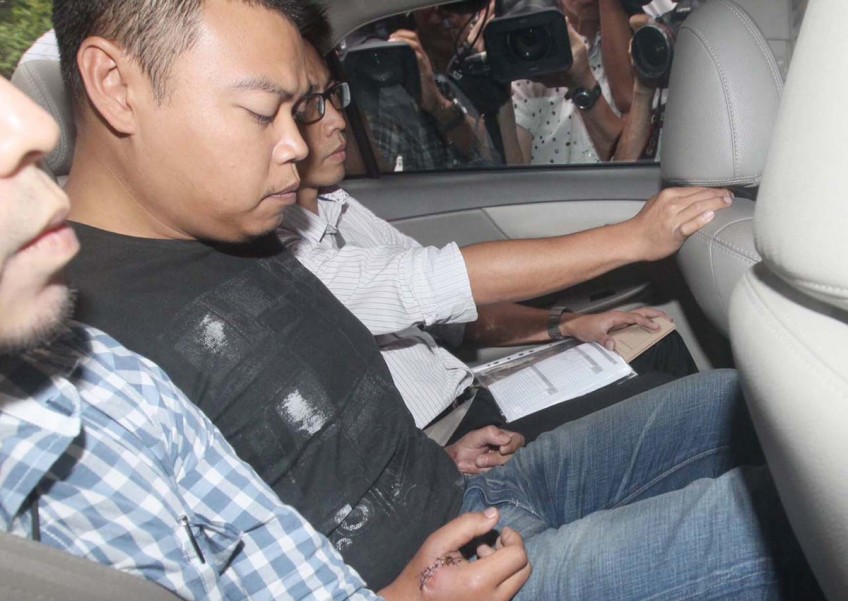 WHERE did the knife used to stab the father and son victims of the Kovan double murder come from?

Could a 67-year-old man said to have bad knees have attacked a policeman about half his age?

These are two key questions that have emerged so far as the trial of former police officer Iskandar Rahmat, 36, for murdering car workshop owner Tan Boon Sin and his son Chee Heong, 42, entered its second day.

Iskandar, then a senior staff sergeant, is accused of repeatedly stabbing the two men within minutes of each other at about 3.30pm on July 10, 2013 at the father's three-storey Hillside Drive terrace house. He does not deny stabbing them to death.

Iskandar said that Mr Tan had come at him brandishing a knife but he managed to wrest it away. He said in police statements that he used the same knife to stab the older man. He then turned the weapon on the son who he said was charging at him.

Ten days after his arrest, Iskandar drew for investigators a simple picture of the weapon he had used - a knife with a serrated cutting edge.

However, two prosecution witnesses have testified that none of the knives in the house had jagged edges.

Yesterday, a long-time fishing buddy of the older Mr Tan was questioned about the knives they used on their fishing trips.

Sherman Loh, 66, had helped the police identify the older victim's fishing gear, which was kept in a shed at the back of the house, eight days after the killings.

During the search, they found three knives - with smooth cutting edges - that Mr Tan used for fishing. Mr Loh testified that as far as he knew, none of the knives belonging to his friend, whom he called Ah Seng, were missing.

He said they preferred to use small knives with smooth edges to cut bait on their fishing trips. They did not use serrated knives because "we like the bait to be clean cut", he told the court.

On the first day of the trial, the senior Mr Tan's widow, Ong Ah Tang, was also questioned at length about the knives in her kitchen.

She told the court she had two sets of knives - one that she regularly used as well as a drawer full of old knives that she no longer used.

She said that all her regular knives were accounted for but was not sure exactly how many knives were in the drawer. She also did not know if her husband knew there was a drawer full of knives. However, she insisted that she was "very sure" that she did not have a knife with jagged edges like the one drawn by Iskandar. The murder weapon was never found.

Apart from the issue of knives, both Madam Ong and Mr Loh were also asked about Mr Tan's knees.

On Tuesday, Madam Ong said that her husband had problems with his knees since 2011 and walked with a limp. She said that he sometimes had to hold onto things to balance himself. Mr Tan had seen doctors to treat his knees and tried different ointments to relieve the pain, she said.

However, he went to work every day and continued fishing. He did not use a walking aid because he felt it was embarrassing, she said.

Yesterday, Mr Loh said that Mr Tan had to get out of the car very slowly, bracing himself. "He was always in pain," he said. That did not stop Mr Tan from going fishing.

The trial continues on Monday.

[[nid:25742]]
SUBSCRIBE TO OUR NEWSLETTER
Your daily good stuff - AsiaOne stories delivered straight to your inbox