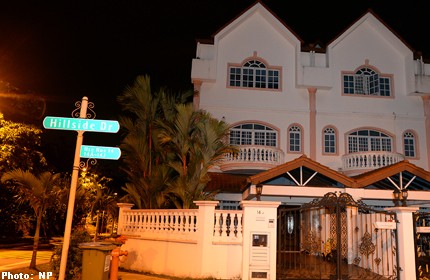 SINGAPORE - His house address is 14J. And three of his family's cars bear the same number-letter combination.

What exactly was the significance of this to Mr Tan Boon Sin, 67, who was killed around the same time as his son on Wednesday afternoon?

The New Paper yesterday found out the significance of the "J" from one of Mr Tan's fishing buddies - the shape of the letter resembles a fishing hook.

The 37-year-old businessman, who wanted to remain anonymous, said Mr Tan was a fishing enthusiast.

Known to the group as "Ah Seng", he would go fishing at least once a month, often for days at a time. In fact, he had just got back from an angling trip last Monday.

"He told us that 14J was actually 14 with a fishing hook, because he liked to fish a lot," the friend said.

But why the No. 14, which when said in Mandarin is a homophone for "to die"? In the Cantonese dialect, it has an even stronger connotation, sounding "sure to die". (See report on facing page.)

It's a number that the more superstitious Chinese tend to avoid, but Mr Tan embraced it.

Why he did so has to remain a mystery for now. His fishing buddy said Mr Tan did not tell him the significance of the No. 14. Mr Tan's family, who might know, are keeping mum.

The elder Mr Tan is survived by his wife, a daughter and another son.

His body, which had multiple lacerations on his neck and face, had been dragged face down for more than a kilometre after being wedged under Mr Tan's Toyota Camry, which bears the licence plate number SGM 14J.

The unknown driver had fled the scene in the car, sparking off a police appeal for the car's whereabouts.

A blood trail from his body led to his father's house at 14J, Hillside Drive, where the older Mr Tan's body was found in the garden with multiple slash wounds.

Mr Tan's Toyota was found yesterday morning in a Eunos industrial estate, a few streets away from where his old car repair workshop used to be. (See report on Page 4.)

The police, who have classified the case as murder, assured the public in a statement last night that the two murders pose little risk to general safety.

A spokesman said: "The public should also refrain from making unfounded speculation as this may cause undue alarm and additional distress to the loved ones of the deceased persons.

"Police investigators are examining all available evidence, including witness accounts."

For many who knew the older Mr Tan, his sudden death was a shock.

His fishing friend said he had initially thought Mr Tan was driving the car when he heard about an accident in Kovan.

"When I heard that the car did not stop despite several motorists honking at it, I thought it was him who had knocked down someone because he is a bit deaf. I was shocked when I was told he had been murdered," he said.

A public records search revealed Mr Tan as the owner of Soc Leon Motor Works, a car workshop in Kaki Bukit. It was previously located in the industrial estate around Eunos Avenue 3.

The used car dealer would frequently send his vehicles to Mr Tan's workshop for servicing.

He found out the bad news in the newspapers and found the licence plate number familiar. When he called Mr Tan's workshop, his worst fears were confirmed.

"I was very surprised. He was a very nice and honest man, and I felt comfortable dealing with him. He wasn't the kind of person who would quarrel," Mr Tang said.

When TNP visited Soc Leon yesterday morning, it was business as usual. At least four cars were being serviced and there was a near constant stream of customers.

The head mechanic, who wanted to be known as Ah Siong, described Mr Tan as a warm, caring and hands-on boss who was friendly to all and had no airs.

He last saw Mr Tan at 2pm on Wednesday when the latter left work early to go home because his knee was acting up.

Ah Siong's eyes welled up as he told TNP that the business had remained open despite the tragedy because it was what his boss would have wanted.

"This shop was his life and blood. We can't stop just because he isn't around. I'm very sad, of course, but we have to go on," he said in Mandarin.

While Mr Tan hardly discussed family matters with his workers, he invited all his employees to his son's wedding "a few years ago".

"It's all the small things he does that makes you feel appreciated. I've been working here for almost 40 years. You be the judge on what kind of boss he was."

Neighbours of his Kaki Bukit shop also said he was a jovial man.

Mr Sun See, a mechanic in the shop next door, described him as a kind man who always made fun of him.

"Whenever he saw me fixing cars outside, he would shout, 'Oi! Why are you taking so long?' It was a sort of joke between us," he said in Mandarin.

He added that Mr Tan's business was brisk and there were times they had to borrow parking space from his shop.

"Mr Tan would come in and tell us nicely that he had to park some cars behind our shop and apologise for using our space. Where do you find a company boss who is so polite?

"He was such a kind man. It's really sad that such a thing has happened."