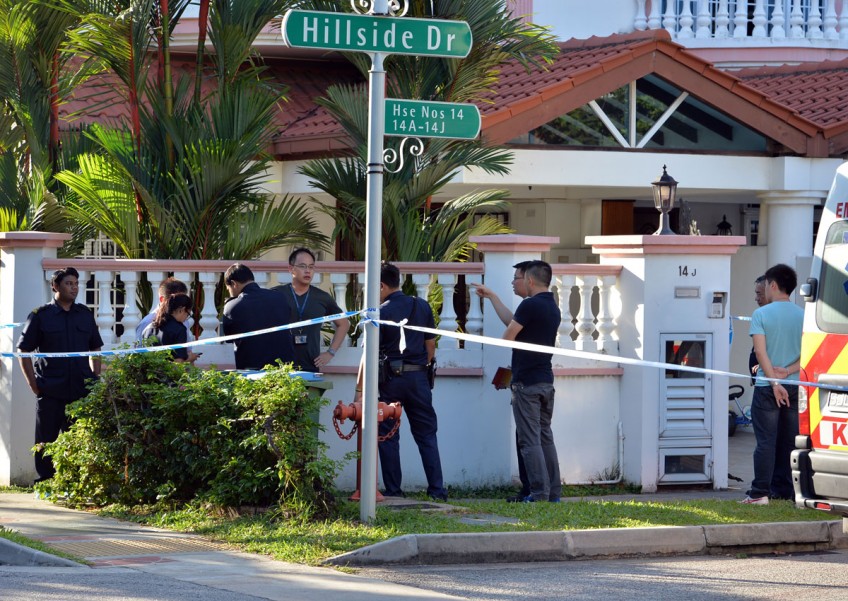 The body of one of the victims was found outside Kovan MRT Station, 1km away from the crime scene at Hillside Drive. His body is believed to have been dragged under a car to the MRT station.
The New Paper

The widely anticipated trial of policeman Iskandar Rahmat, accused of a double murder in Kovan more than two years ago, is scheduled to start in the High Court tomorrow.

Iskandar, 36, has been remanded in custody since his arrest at an eatery in Johor Baru two days after allegedly killing a father and son.

He is charged with murdering car workshop owner Tan Boon Sin, 67, and Tan Chee Heong, 42, by inflicting multiple knife wounds on them at about 3.30pm on July 10, 2013.

The older Mr Tan's body was found in his Hillside Drive terrace house and his son's was found on the road outside Kovan MRT Station, 1km away.

Details of the deaths shocked Singaporeans, especially accounts of how the younger man's body was dragged under the family's Toyota Camry before it was dislodged outside the MRT station. The blood- stained car was found in Eunos.

But the biggest surprise came when it emerged that the suspect was a policeman. Iskandar, then 34, was a senior staff sergeant attached to Bedok Police Division and had been with the force since 1999.

Announcing Iskandar's arrest on July 13, 2013, then-Police Commissioner Ng Joo Hee said that when he was told the suspect could be a cop, his reaction was disbelief, swiftly followed by anger and anguish.

"I cannot remember the last time a murder suspect was also a police officer. You may have seen this kind of thing depicted in the movies and on TV, but when it happens for real, it hits you like a freight train," he said.

On July 15, Iskandar was charged with two counts of murder. Police said he had been interdicted, a step taken when a civil servant faces serious charges, and includes suspension from duty and docking of pay.

Police also confirmed that he was facing disciplinary proceedings for failing to declare his personal debt.

Iskandar's trial is scheduled over two tranches, during which Justice Tay Yong Kwang will hear testimonies from more than 100 witnesses.

The first tranche, due to last from tomorrow until Oct 30, will see mainly witnesses of fact taking the stand. The second is set to take place from March 29 to April 8 next year and will focus on expert evidence from forensic pathologists, psychiatrists and other experts.

American forensic scientist Henry Chang-Yu Lee, who worked on famous cases like the JonBenet Ramsey murder and trial of American football player O. J. Simpson, will testify for the prosecution.

Iskandar is charged under Section 300(a) of the Penal Code, which carries the mandatory death penalty. It is the most serious form of murder in which there is intention to cause death.

Generally, a person charged with murder can raise several defences for their actions, including provocation, self defence and sudden fight. If the court accepts his defence, he will be found guilty of culpable homicide, which carries the maximum of life imprisonment, and caning.

Another defence option is to convince the court that Iskandar's acts fall under the three other forms of murder, in which the court can choose to impose the death penalty or life imprisonment and caning.