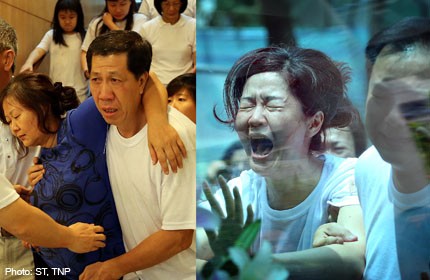 SINGAPORE - Younger brother, Tan Chee Wee, was heard shouting at the funeral in Hokkien: "Dad, brother, don't worry I will take care of the family. Brother, your kids are my kids." The bodies were cremated around 3.40pm on Tuesday afternoon.

SINGAPORE - The wife of the younger Mr Tan who had been calm throughout the rites earlier on Tuesday afternoon suddenly shouted out in anguish as she pushed the hearse carrying her father-in-law. She cried as she looked towards the sky and stamped her feet.

At the last day of the wake on Tuesday, three priests arrived at about 10.30am and about 15 family members took part in funeral rites. About 40 other friends and relatives are at the wake, with more visitors expected to stream in before the hearses leave the Teochew Funeral Parlour in Ubi on Tuesday afternoon.

SINGAPORE - A police spokesman said Mr Ng Joo Hee was there to pay his respects and to offer his condolences to the family of Mr Tan Boon Sin, 67 and Mr Tan Chee Heong, 42, the father and son who were killed last Wednesday in their home at Hillside Drive in Kovan estate.

Madam Ong - the elder Mr Tan's wife - let out a loud wail after seeing the bodies of her husband and son.

Victims' bodies claimed by family members
As the casket van left the mortuary, a teary Mr Tan Chee Wee dabbed his eyes with a tissue paper, while his uncle Ong Boon Kok placed a comforting hand around his shoulder.

But if suspect Iskandar Rahmat is found guilty, the family wants him to get "the full punishment he deserves".