Kovan murders: No warning, no escape for suspect 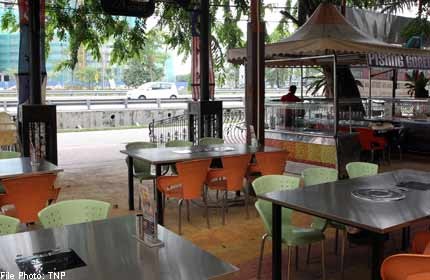 The restaurant entrance where policeman Iskandar Rahmat was arrested, right outside the Singgah Selalu Restaurant in Danga Bay.

SINGAPORE - The motive remains unclear. But what is certain is that the suspect, Iskandar Rahmat, a senior staff sergeant with Bedok Police Division, had time to park the stolen getaway car in an industrial estate in Eunos, return home to retrieve his passport and green Vespa scooter, before hightailing it across the border.

But when Iskandar was arrested at 11.30pm on Friday night in front of the Singgah Selalu restaurant in Danga Bay, Johor Baru, he had neither time to order nor eat his food.

He was near the exit when a group of men - policemen in plain clothes - came up. One of them put an arm on his shoulder to prevent him from getting away, said an eyewitness at the popular and crowded restaurant.

There was no scuffle and he was led away to an unmarked car. Restaurant manager Rohani Awang, 48, said not many people realised what was happening.

It was this information that helped them track Iskandar, he said.

Iskandar was "positively identified" crossing the Woodlands Causeway border at about 11.20pm on Wednesday, said sources in the Malaysian media - just hours after the grisly murder and while his colleagues were still poring over the crime scenes.

It is believed that he then checked into the budget- priced Tune Hotel, owned and run by AirAsia, located just down the road from the restaurant where he was arrested.

The New Straits Times reported that Johor's police officers were briefed about the suspect on Thursday, sparking off a massive manhunt.

Johor's officer in charge of criminal investigations, Dr Hashim Harun, told The New Paper on Sunday that a team of "four to five men" had been in charge of capturing the policeman.

When asked, Dr Hashim declined to elaborate on how the fugitive was tracked and would say only that they "found him wandering around JB (Johor Baru) Town and we just picked him up".

His green Vespa scooter has been impounded and it is understood to have been brought back to Singapore for investigations.

The Singapore Police made the announcement about the arrest on their Facebook page at around 2.30am on Saturday. The arrest closed the chapter on a horrifying double murder that had gripped the imagination of many over the previous 54 hours.

On Saturday, officer Iskandar was handed over to the Singapore Police. His arrival at the Cantonment Police Complex at about 12.15pm was greeted by a horde of photographers and journalists.

The stocky, light-complexioned man who was wearing a tight black T-shirt sat stoically in between two officers in plain clothes, staring straight ahead, without any attempt to escape the multiple flashes from the photographers' cameras.

Less than two hours later, Iskandar was taken to the crime scene at Hillside Drive in an unmarked champagne-coloured sedan.

A police cordon was erected around the entire block to keep onlookers out, but it had already drawn a large crowd of people craning their necks to get a glimpse of the alleged murderer.

The suspect's hands and feet were cuffed, said some eyewitnesses.

The police entourage left at about 3.15pm, after the suspect had spent about 20 minutes inside the terrace house.

By this time, tempers had frayed in the neighbourhood, as the crowds and backed up cars clogged up the small roads.

Simultaneously, while Iskandar was re-enacting the crime, police officers were trying to gain entry into his HDB flat at Kim Keat Avenue.

They were kept waiting for at least 20 minutes as an elderly couple inside the flat, believed to be his parents, refused to heed their calls.

The door was eventually opened and a team of forensics officers swarmed the flat. They took away four bags of evidence.

The elderly couple did not respond to journalists' requests for interviews.

Mr Hadi Ho also told the media that "PDRM is always prepared to assist the police force in any neighbouring countries to arrest a crime suspect".

He said: "We don't want any international criminals to turn Malaysia as their hiding place."

The story so far

1 On Wednesday afternoon, Mr Tan Boon Sin, 67, was killed in his Hillside Drive home. He was slashed.

2 Earlier, he had reportedly left some business colleagues in a hurry, and gone to the Certis Cisco Centre in Paya Lebar to withdraw some items from a safe-deposit box before returning home.

3 At 3.40 pm, witnesses saw his son, Mr Tan Chee Heong, 42, stagger out from the house bleeding profusely from his neck. He collapsed, face down, in a pool of blood at the gate.

4 Then the suspect revved up the family's Toyota Camry, which bears a licence plate that matches the address, SGM 14 J, and drove over the body which got lodged under the car.

5 The body was dragged face down for about 1km - despite other motorists honking desperately to try to stop the suspect who was weaving through the traffic.

6 The body eventually fell off near Kovan MRT station, where a motorcyclist, Mr Raheem Samad, 36 - who had been chasing the car - stopped his bike, using it to shield the body from oncoming traffic.

7 The car was found on Thursday, abandoned in an industrial estate in Eunos.