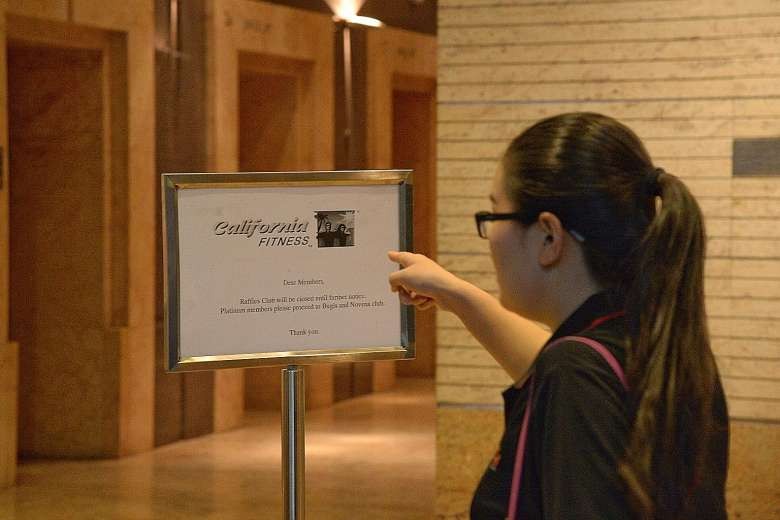 A sign at the Republic Plaza outlet's entrance says the gym is closed "until further notice". The building's management said it terminated the lease agreement and repossessed the premises after the fitness chain failed to pay rent despite several attempts to "engage" JV Fitness.
The Straits Times

Gym chain California Fitness closed its Raffles Place outlet yesterday "until further notice", but The Sunday Times has learnt that the unit was repossessed due to its failure to pay its rents.

This has raised the possibility that the chain, having shut all its outlets in Hong Kong last Tuesday after chalking up millions of dollars in debts, is also in financial trouble here and set to pull out from Singapore as well.

The chain, run by parent company JV Fitness, yesterday put up a notice on Facebook and at its Republic Plaza Tower 2 branch to say the outlet was "closed " and directed members to its remaining outlets in Novena and Bugis.

Staff at the gym's Bugis Junction Towers branch told The Sunday Times that the closure of the Raffles Place outlet was temporary, but could not say when it would reopen. When contacted by phone, the club's general manager, Mr Paul Lim, said he was busy and hung up.

A spokesman for Republic Plaza building management said it had made several attempts "to engage JV Fitness on its rental arrears".

When the first California Fitness gym opened here in 1998, it was one of the first "mega-gyms", with a floor area more than five times the size of an average gym then. By 2002, the chain had more than 15,000 members.

The Ngee Ann City outlet closed in February this year. California Fitness said it was due to "variable business strategies and decisions".

An irate gym member, who wanted to be known as Ms See, was at the Bugis branch yesterday to demand a refund for a 26-month package she paid $1,700 for on July 7.

"Before I signed the contract, I added a clause to say that in the event that it closes any one of its outlets, I had the right to get a refund. But the staff just told me they could not process a refund for me," said the 38-year-old, who works at a logistics firm.

She has informed her bank to stop further payments to the gym.

Another member, compliance officer Ms Lim, 26, who goes to the gym twice a week, said: "We already felt the impact when the Ngee Ann City branch closed as the remaining gyms were more packed. So I am worried it will be even harder to book classes now."

Singapore's consumer watchdog chief has urged California Fitness to be more forthright about its upcoming plans.

Mr Seah Seng Choon, executive director of the Consumers Association of Singapore, advised consumers to ask the gym about the lease of the outlet they intend to use before signing a package.