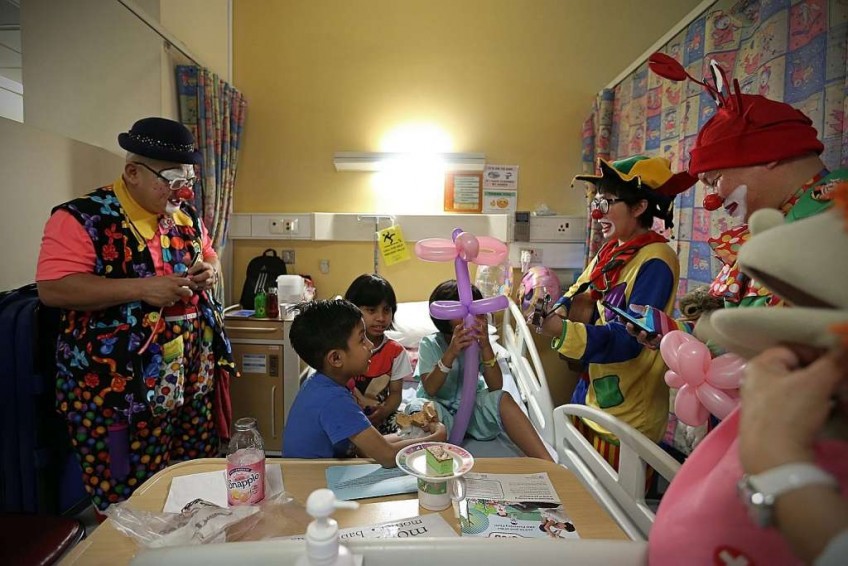 Anyone who thinks clowns are scary has not met these guys.

With their red noses and white face paint, rainbow-coloured outfits and oversized shoes, the Caring Clown Unit (CCU) has brought nothing but love and laughter to the sickest children at KK Women's and Children's Hospital.

This group of volunteers, formed in 2004, visits the paediatric wards every last Saturday of the month to sculpt balloons, perform magic tricks and basically be silly, to try and make a child smile.

With ages ranging from 26 to 62, the 11 active members are a motley crew, with different personalities and from various walks of life, counting among them a policeman, vehicle mechanic, handyman, polytechnic lecturer as well as two housewives, three retirees and two business and marketing executives.

They believe that care clowning is a form of diversion therapy that can help heal one's body and spirit, especially if a person feels trapped in a predicament and loses the joy and happiness of living.

Housewife Ellen Toh, who has three children, is one of the four pioneer clowns in the group. The 61-year-old former teacher is "Tellie", a clown who tells stories and carries a rubber chicken as part of her signature act.

The pioneer clowns met 13 years ago at a local clown camp and discovered they shared a desire to bring cheer to patients. Thus was the CCU born, available to organisations that need their special brand of TLC.

"After more than a decade of walking the wards as a clown, I have come to realise it is not a one-way traffic of dispensing cheer," said Madam Toh.

Seeing the children's steely resolve in times of great discomfort, their innocence and smiles despite their pain, as well as the unconditional love of their caregivers, inspires the volunteers and constantly reminds them to count their blessings.

"Life is a two-way carriageway of give and take, hope and despair, joy and sadness, laughter and tears," Madam Toh added.

Caring for a mother with dementia, she understands the challenges of a caregiver and being a clown reminds her to face each new day with humour and courage.

Besides its KKH gig, the group also does clowning at birthdays, a tie-up with Star Pals (Paediatric Advance Life Support) - a palliative service dedicated to improving the quality of life for seriously ill children in the comfort of their homes.

A child with a terminal illness is sometimes not even aware of what is going on, so it is often those around them who draw comfort from the clowning.

"It's sad to know that the child may be celebrating his or her last birthday, but I try my best to sing, dance and bring colour to the party and smiles to the caregivers. I hope our presence will give the families some nice memories," said Ms Tan Shumin, who at 26 is the youngest member of CCU and the one who handles administrative matters.

CCU has also worked with The Boys' Brigade, Institute of Mental Health, Melrose Home Children's Aid Society, Society for the Physically Disabled and Saint Andrew's Community Hospital, among other groups.

Where CCU does not clown about is in its conduct and training. Because the unit's work concerns mainly children, senior members take great care in running background checks on interested applicants, observing them for at least a year before they are allowed to become an official member.

Read also: A mother's story with daughter's terminal disease: 'I couldn't accept this'

They are conscientious about adhering to the rules and regulations of the facilities they visit, and members take maximum precaution to minimise the risk of spreading disease. For instance, they are not allowed to take up assignments if they are not feeling well or suspect they may have a virus.

It is the member's responsibility to attend all training conducted by CCU and be committed to practice. Everyone must be able to perform a minimum of five magic tricks with a selected theme or storyline, produce a minimum of three balloon figures within 10 minutes and juggle a minimum of three objects for at least a minute. Members are also expected to conduct their own research and practice in addition to the official training.

To hone their skills, seven of them are headed to Bangkok for an international clown convention organised by the World Clown Association at the end of the month.

Because they just had to, the group came up with "the 10 Clownmandments" when they first came together. Pinned to the noticeboard in the volunteers' room at KKH, members read each statement aloud before they go to the wards. The first Clownmandment declares "I clown because I care", and - in their firm conviction that laughter is the best medicine - they seriously do.

The Caring Clowns from Through the Lens on Vimeo.