The Lee Kuan Yew I remember: His friend Henry Kissinger, 91 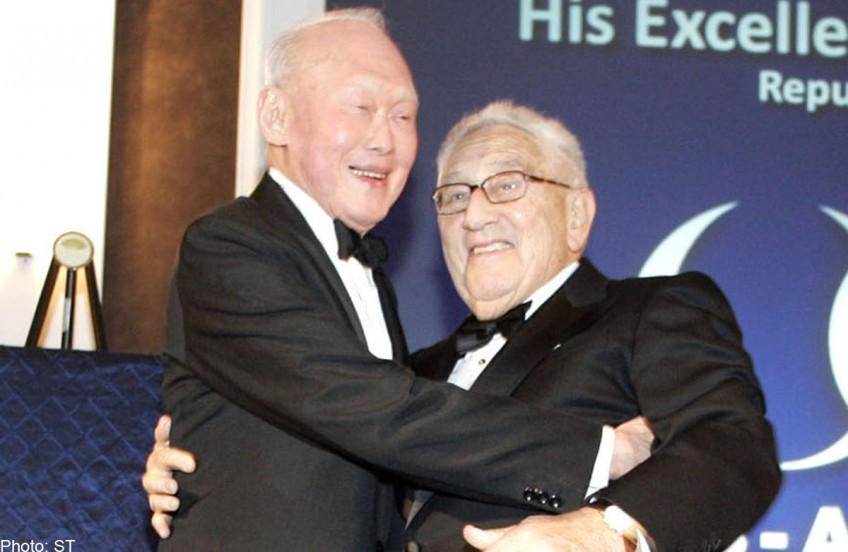 ONE evening in 1967, a young Lee Kuan Yew walked into a lion's den and emerged with a friend for life.

At a dinner with Harvard University scholars, the liberals were taking turns to brand US President Lyndon B. Johnson a "war criminal" and a "psychopath" for escalating conflict in Vietnam.

But when it came to Mr Lee, he made it clear they could not be more wrong. America's stand was crucial for the future of a non-Communist South-east Asia.

Recalls Dr Henry Kissinger, who was meeting him for the first time: "His first words were 'you make me sick'. Which took great courage."

That display won over the former US Secretary of State, who was then a Harvard don. Thus began one of the world's most high-powered and enduring friendships between two masters of realpolitik.

From the beginning, Dr Kissinger says, "he impressed me with his clarity of analysis, with his strength that he showed in facing his challenges, and with the courage in which he defended his position".

As much as Mr Lee is known for his force of personality, Dr Kissinger is adamant his friend did not gain the influence he did by charm or cultivating personality.

"He did it, and insists on doing it, by performance," he says.

Their friendship has been marked by regular phone calls and visits, but Dr Kissinger insists it was never a "sentimental" one. Ever the realist, he says: "When Lee Kuan Yew and I meet, we don't protest each other's friendship to each other. We have shown it in our actions to each other."