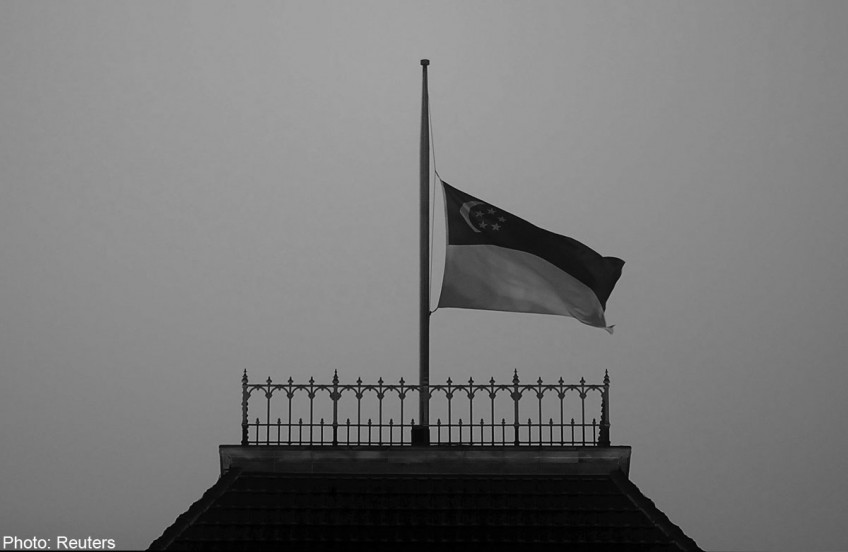 The state flag is pictured at half-mast at the Parliament building in Singapore March 23, 2015. Lee Kuan Yew, Singapore's first prime minister and architect of the tiny city-state's rapid rise from British military outpost to global trade and financial center, died on Monday aged 91.

PM Lee will address the nation 'live' at 8am today, according to a statement from the Prime Minister's office at 6:30am.

The statement also said that Mr Lee's body will lie in state at Parliament House from Wed to Sat (March 25 - 28). Those who wish to pay their respects can do so from 10am to 8pm daily during this period.

Condolence books and cards will be available in front of Istana by the Main Gate from Monday to Sunday, for those who wish to pen their tributes to the late Mr Lee. Condolence books will also be opened at all Overseas Missions for Singaporeans and friends living abroad.

A State Funeral Service will be held at on Sun (March 29), 2pm, at the University Cultural Centre, National University of Singapore.

The service will be attended by the late Mr Lee's family, friends and staff, the President, Cabinet Ministers, Members of Parliament, Old Guards, senior civil servants, grassroots leaders and Singaporeans from all walks of life, said the statement. The state funeral will be followed by a private cremation at Mandai Crematorium.

State flags on all government buildings will be flown at half-mast from today to Sunday as a mark of respect.