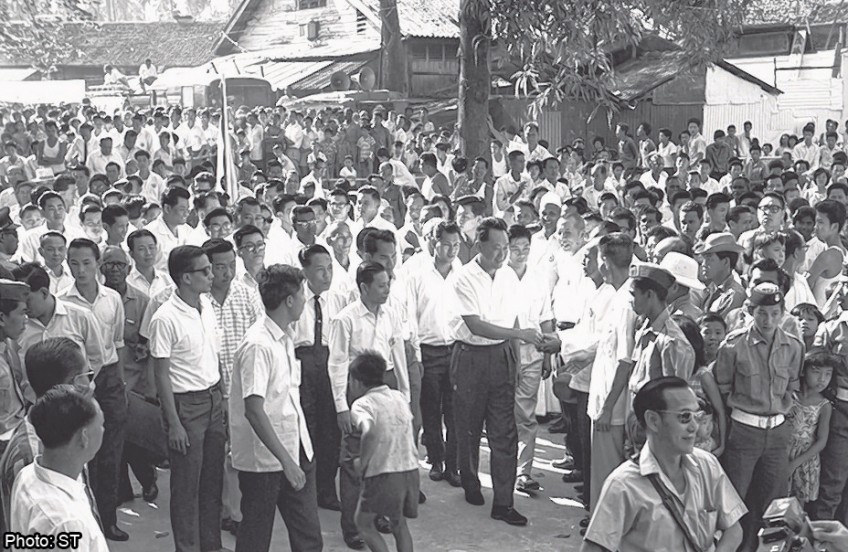 EARLY YEARS: Then Prime Minister Lee Kuan Yew shaking hands with residents during a tour of Punggol constituency in 1965.

If his life could be captured in a succinct tweet, it would be that Mr Lee lived his truths. If his truths were at times harsh, tough. It is safe to assume that he would make no apology.

Mr Lee Kuan Yew's take on death was typically Harryesque: "Life is better than death," he once said.

"But death comes eventually to everyone."

How you reacted depends on what the man meant to you.

Throughout his life, he brushed off all talk of legacy. Yet that legacy is clear.

His legacy is your life.

Each man touches lives in the manner of a brush against canvas. The bigger the man, the broader the brush.

That Mr Lee was behind every stroke of the brush, whether broadly or briefly, is beyond doubt.

So there is no need in this space to recap or appraise his life.

To do so would require a tome. Indeed others, more fortunate to have been politically intimate and privy to Mr Lee's personal life, would claim greater legitimacy for such a task.

I write, if I may, on your behalf.

I do not mourn for him; I mourn for us, in our hour of darkness, for the passing of greatness.

Like you, I have had few personal encounters with Mr Lee.

One was pleasant. Another was memorable for having felt a measure of his infamous impatience.

Another Ken Jalleh from another era was the editor of a newspaper in Hong Kong.

A report on Mr Lee's visit to the then British colony was written by him.

Mr Lee was reportedly furious. Many years later, when I joined The Straits Times, I realised the extent of Mr Lee's famous powers of recall.

Would he bear a grudge? Would the son somehow be penalised for the sins of the father? No.

A more pleasant encounter occurred when I was chilling with a cold beer in the late afternoon along the newly cleaned-up Singapore River.

A bodyguard, who was an old schoolmate, walked up.

The bodyguard stopped to chat when, walking briskly behind him, in white tennis shorts, white T-shirt and track shoes, was Mr Lee.

I rose and stiffened, as any Singaporean NS-trained son is wont to do, hairs on end, agog, fighting the instinct to salute.

He stopped for what seemed like eternity, smiled, nodded, and moved on. It was enough to feel the power of his aura. And bask in the warmth of a benign smile.

I have met many of Singapore's most powerful. No one could draw the same awe.

To Mr Ordinary You and Me, Mr Lee was a distant, impersonal icon. Yet, that distance was somehow bridged by the sheer influence and impact he has had on our lives, both physical and emotional.

He is manifest in all that you see, big, small and iconic; in the trees and shrubs lining the streets, in every element leading to and within the walls of your HDB home, in the port, the airport, the clean rivers, the parks, in the corruption-free, efficient institutions.

You may not have noticed it, but Mr Lee touched every aspect of your life, whether minute, momentous, or just mundane.

So, too, was he pivotal in creating the newspaper you have in your hands.

Nearly three decades ago, he saw the need for a newspaper appealing to students, blue-collar workers and heartlanders who were less inclined to read lengthy reports or analysis.

He felt it necessary to have a newspaper that could explain complex policy simply, succinctly and vibrantly.

Just as he could bring to bear his intellect in reading the tea leaves of future world trends, he could see, amazingly, a future of disruptive innovation, of social media distractions and deleterious attention spans.

Even then, he was concerned about the encroaching individualism among the young, influenced by the West, and their preferred media diet of all that is viral and - worryingly - virulent.

And so The New Paper came to be touched by Mr Lee 26 years ago.

His imprint extends, too, to the small print of your social self: In the way you behave, the way you think, your pragmatism, your peculiarities.

It is a relationship between Founding Father and Beholden Benefactor.

So this is about you and Mr Lee Kuan Yew, and the ties that irrevocably bind you to the man who engineered - and sometimes micro-managed - your life.

He was your choice. And, after having made your choice time and again, he became the master-planner of your destiny.

It is what the 19th-century writer Henry James called "the strangely accepted finality of relationship".

In the first flush of our grief, there have been lengthier tributes, some coldly analytic, some with grudging respect, others with gushing regret despite the inevitability of his death.

How do you do the impossible by summing up such a momentous life, and do so with brevity, bereft of the sentimentality he disdained?

In One Man's View of the World, he says: "I am not given to making sense out of life - or coming up with some grand narrative on it - other than to measure it by what you think you want to do in life.

"...I have done what I had wanted to, to the best of my ability. I am satisfied."

If his life could be captured in a succinct tweet, it would be that Mr Lee lived his truths.

If his truths were at times harsh, tough. It is safe to assume that he would make no apology.

Regrets? It is unproductive, he said in the book, Hard Truths To Keep Singapore Going.

Yet, regret we must for the emptiness of that throne, once dominated by a man of rawhide resolution, a mover of masses with his sheer power of oratory, an intractable fighter with a knuckle duster forged by the force of logic and the logic of force.

Regret, too, at the reality that he is irreplaceable. You can copy the style but never the formidable intellect, the substance, behind the style.

That style, backed by self-assuredness and an obstinate honesty in what he believed was right, won him rock-star status and the spite of detractors.

In unequal measure, it made him fearsome, respected, reviled, loved.

Alas, in the grand audit of a man's life, ultimately the question is whether he did more good than bad; whether our canvas has been enriched or tarnished by his brush.

"Dying," said Red Smith, the legendary Pulitzer Prize-winning writer, "is no big deal. The least of us will manage that.

"Living is the trick."

If that were so, Mr Lee Kuan Yew's life was a trick too intricate to replicate.

His trick is phenomenal: The propulsion of our lives from third world to first in 25 years.

His trick is Singapore.

The life and times of Lee Kuan Yew

Harry Lee Kuan Yew is born into a wealthy Chinese family. He was a fourth-generation Singaporean.

He goes to England to study after World War II, briefly attending the London School of Economics before moving to the University of Cambridge, where he reads law. He graduates with a rare double-starred first (double First Class Honours).

He bands with a group of fellow English-educated, middle-class men to found the People's Action Party (PAP). He is made its secretary-general, a post he holds until 1992.

He becomes the first prime minister of Singapore when the PAP wins 43 of the 51 seats in the Legislative Assembly.

He campaigns for merger with Malaysia to end British colonial rule and Singapore becomes part of Malaysia on his 40th birthday.

Malaysia severs ties with Singapore. With that, the Republic of Singapore under Mr Lee's leadership is born.

Impressed that the noise footprint of planes landing and taking off at Boston's Logan International Airport was over water, he decides to build Changi Airport.

He steps down as Prime Minister, handing over the reins to Mr Goh Chok Tong.

Having governed for three decades, he becomes the longest-serving Prime Minister in the world.

He takes on the advisory post of Minister Mentor. The post was created by Prime Minister Lee Hsien Loong when he becomes Singapore's third PM.

His wife of 63 years, Madam Kwa Geok Choo, dies in her sleep.

He announces his retirement from the Cabinet after the General Election that year.

He dies, leaving behind three children and seven grandchildren.

This article was first published on March 24, 2015.
Get The New Paper for more stories.