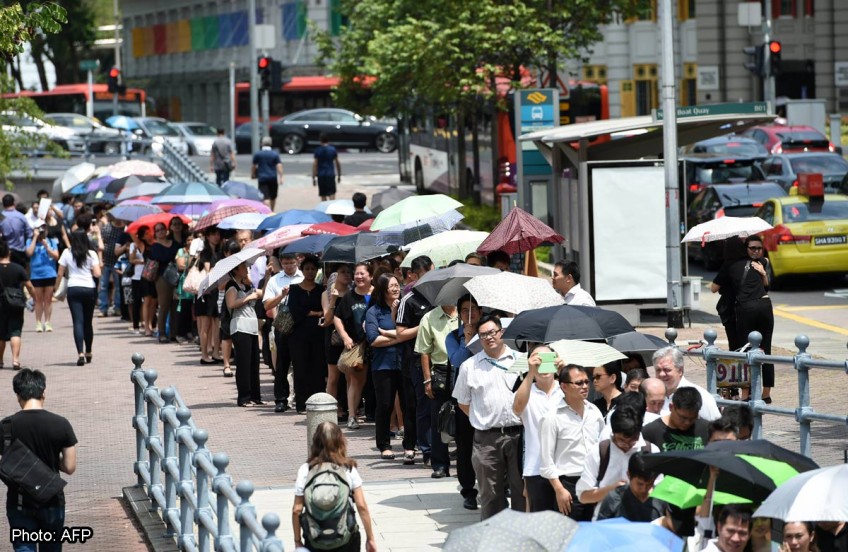 SINGAPORE - Singapore is internationally renowned for its efficient organisation, and planning around the death of the city-state's first prime minister, Lee Kuan Yew, is no exception.

Within a few hours of his death at 3:18 am on Monday the government had confirmed the traffic arrangements for his state funeral and sent out invitations. Community centres around the country had glossy photo exhibitions of the former leader ready to roll out.

Condolence boards were swiftly erected outside the parliament and Istana, site of the prime minister's official residence. And at the end of each day the government releases a tally on how many cards have been issued to visitors at the two sites - 12,350 by Monday, rising to 21,000 on Tuesday.

Lee, who led Singapore from 1959 to 1990, strived to make the country stand out as a beacon of orderliness in a region used to a more chaotic way of life.

The country's Changi Airport is regularly voted the best in the world because of its efficient service. Its public transport system is seen as world-class, despite a few gripes about over-crowding.

Screens at the city-state's subway stations and signs on buses are all carrying the message "Remembering Lee Kuan Yew 1923-2015".

Free shuttle buses have been laid on to help ferry people to condolence sites at community centres.

Other institutions have also been quick to pay tribute.

The National Museum of Singapore opened a memorial exhibition about Lee Kuan Yew on Wednesday. At the country's world famous botanic gardens on Tuesday, a new variety of orchid named after the former leader was presented to his son, Prime Minister Lee Hsien Loong.

The government will have been planning how to deal with the death of Lee, who was 91, for some years. His funeral on Sunday will be attended by scores of foreign dignitaries, including India's Prime Minister Narendra Modi and Indonesian President Joko Widodo.

Even the massive queue of people turning out to see his body lie in state on Wednesday was carefully managed, with water distributed to those in line and regular updates on the waiting time.

Still, for some Singaporeans, while they appreciate the ease with which they can pay tribute to the man who pioneered their country's transformation, it all feels a little choreographed.

Felicia Wong, a 20-year-old undergraduate, who had come to the Istana to pay tribute said things felt almost too well organised. "It's as if they have been preparing everything, waiting to be mobilised," she said.