A Leo with a big heart 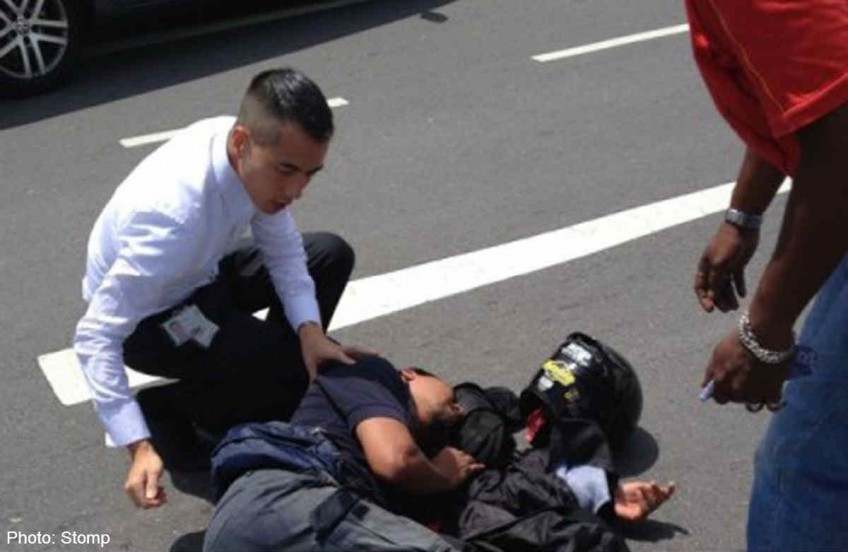 A picture of him helping an injured biker caused a little stir on the Internet, with more than 4,000 shares on Facebook.

But rather than praising him for his good deed, netizens were fixated on his looks.

On June 27, Mr Leo Jeoh, 36, was on his way back to his office at Seletar Aerospace Park after a lunch meeting when he saw a biker lying on the road along Jalan Kayu.

The motorcyclist had crashed into a road divider and was grimacing on the road.

The senior design manager at Airbus Helicopters pulled over and tried to make the accident victim feel comfortable.

He also took the wire gauze from his car's first-aid kit and tried to dress the biker's wounds.

Mr Jeoh, who found out about the huge reaction only after his friends texted him, said he was taken aback by the comments.

"You can't even see my face from the picture!" he exclaimed.

"I don't have Facebook, so I didn't really know about the comments. It's entertaining," he said.

Pointing out what he was wearing that afternoon, he joked: "Maybe it was the shirt. It's a good shirt, it's tailor-made.

"But I will not let this get to my head. To me, it feels very surreal, like they are talking about the guy in white shirt in the picture, not me," he said.

Mr Jeoh added that he felt bad about hogging the limelight when there were many more good Samaritans who came forward to help that day.

"Before I pulled over, there were already two cars parked by the roadside to render help. One guy stood there sheltering us with the umbrella, as it was a really hot day," he said.

"And the guy in red, he probably did the most useful thing. He used the biker's phone to call his wife to inform her of the accident. "After that phone call, the biker looked visibly more willing to wait for the ambulance to arrive," he said.

The injured biker's wife, who wanted to be known only as Aidah, said she was shocked when she found out about the accident from a man whom she knew as Mr Syawal.

TNP understands that Mr Syawal is the man in red in the picture circulated online.

Though she did not speak to Mr Jeoh personally, Madam Aidah, 31, said she knew from the picture that Mr Jeoh had helped out as well.

"I feel lucky," she said of the good Samaritans pulling over to help.

"(My husband) was having high fever the night before the accident.

"He refused to see the doctor the next day and went off to work.

"After half a day of working, he decided to go back home as he could not take it any more.

"He was nearly home when the accident happened," she said.

Following the incident, Mr Jeoh said he has been getting teased by friends about his "newfound fame".

"They tease me and call me a 'selfless driver' all the time," he said.

But Mr Jeoh thinks that stopping to help was nothing out of the ordinary.

"Anyone who saw what had happened would do the same too," he said.