Singapore's wealthiest tycoons saw their combined fortunes surge 25 per cent in the last year as the Covid-19 pandemic proved a boon for technology companies, according to Forbes Asia.

The founder of ventilator maker Shenzhen Mindray Bio-Medical Electronics, Li Xiting, rode a wave of surging demand for medical equipment, to be crowned the richest person in the city state.

The combined net worth of Singapore's 50 richest people jumped to US$208 billion (S$282 billion) as of July 26, up from US$167 billion a year ago, the 2021 Forbes' Singapore Rich List revealed. Despite Singapore's economy shrinking 5.8 per cent last year, its internet sector has thrived and minted new tycoons, most notably those at the helm of Southeast Asia's most valuable technology companies, Sea and Grab.

Propelled by the pandemic, Li rose to the No 1 spot with a fortune of US$23 billion. Supplying ventilators and other medical equipment at a time when the world badly needed them boosted Mindray's share price, adding an extra US$5.2 billion to his fortune and taking him up from second place in the 2020 list. The stock has surged by about 320 per cent since listing in October 2018.

Zhang Yong and Shu Ping, the married couple behind the Haidilao hotpot empire slipped from the top spot to No 4 as their hugely popular restaurant chain took a beating from dining restrictions arising from the pandemic.

The couple stole headlines when they became naturalised Singapore citizens and went on to hold the top spot in the wealth rankings for two years running. Their fortune has been eroded, from US$19 billion to US$16 billion this year.

From a February peak, Haidilao's Hong Kong-listed stock has plummeted 61.9 per cent. The couple, who are ranked together as one item, are among seven people on the list whose fortunes have declined.

The second spot went to Facebook co-founder Eduardo Saverin, who derives much of his US$20.5 billion fortune from his stake in the social media giant. 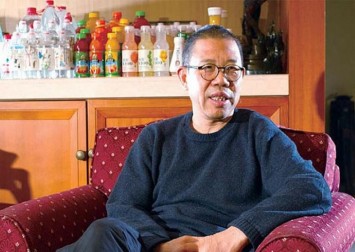 Paint tycoon Goh Cheng Liang came in third with a nest egg of US$18.6 billion, largely garnered from gaining control of Japan's largest paint maker, Nippon Paint Holdings. The US$12 billion deal was made in January.

Meanwhile, Singapore's flourishing tech start-up scene cemented rankings for Forrest Li (No 5, US$15.9 billion), Gang Ye (No 7, US$10.3 billion) and David Chen (No 13, US$3.1 billion), the trio of co-founders behind gaming and e-commerce company Sea. They emerged as the biggest gainers on the list in percentage terms.

The Malaysian-born Anthony Tan, who co-founded Grab, makes his debut at No 47 with his US$790 million fortune. The ride-hailing and food-delivery super app is expecting to go public via a merger with a special purpose acquisition company, or SPAC, in the fourth quarter, valued at nearly US$40 billion.

Youngest to appear on the prestigious list was 38-year-old Binny Bansal, who founded Indian e-commerce firm Flipkart and now mentors start-ups from Singapore. The minimum net worth to get onto the list this year was US$735 million, up from US$610 million last year.

The net worth of those on the Forbes list is based on stock prices and exchange rates at market close on July 26 this year. It includes family fortunes, including those shared among extended families.

The list includes foreign citizens who reside in Singapore, as well as those that are not residents but have significant business in or ties to the city state.