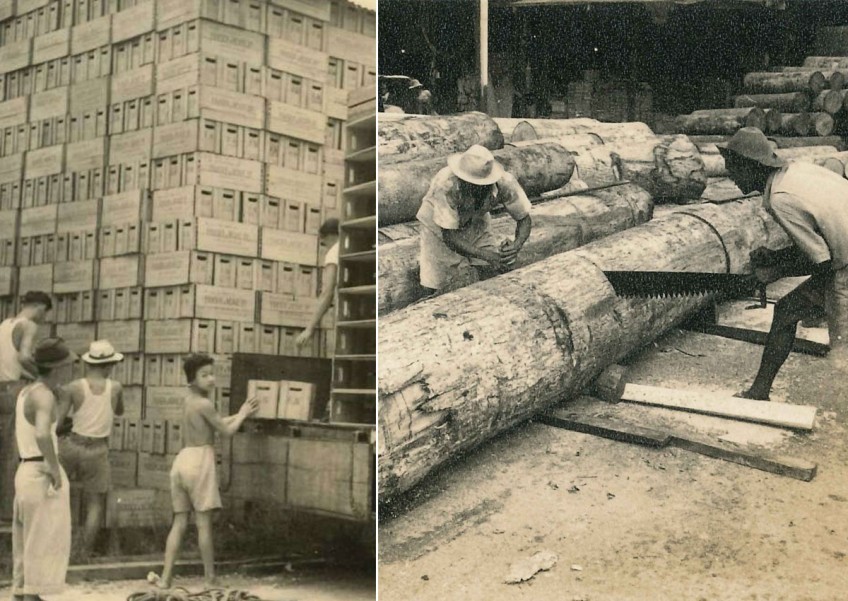 Balestier used to be home to one of Singapore's largest sawmill factories. Called Hiap Chuan Joo, it produced wooden crates used for beverages such as Coca-Cola and Tiger Beer.

Its heyday was in the 1950s and 1960s, when a hundred or so workers ran the 7,600 sq m space. Barefooted men donning hats would use long blades to saw through large timber logs from Malaysia.

The sawmill's activities are detailed in 195 images and documents now on loan to the Sun Yat Sen Nanyang Memorial Hall in Balestier by Mr Ng Siew Hock, 87, the third son of the late owner, Mr Ng Boon Huay.

Mr Ng, a photography enthusiast, had used a Leica to snap these images. The National Heritage Board (NHB) digitised the photographs and worked with the family to date and caption them.

About 20 of them have been added to the Balestier: A Hundred Years special exhibition at the memorial hall, which runs till April 24.

Prior to this, archival materials on the timber industry in Balestier were limited except for records such as an oral history account of a former Balestier resident.

In the account recorded by the National Archives of Singapore, Mr Chua Lai Teck recalled that the area once had a timber merchant. He had said: "So you want to buy some timber to build a house, yes, the timber merchant is there. You can buy from there because they bring in (the timber) by the boat."

"The photographs are important because they offer never-seen-before glimpses of a sawmill in the 1950s to 1960s, its operations and its products, and, in doing so, enrich our understanding of the timber trade in the Balestier precinct."

Mr Ng's daughter Helen, 56, a teacher, said: "We were the largest sawmill at that time. Nobody else had the grounds to be able to manufacture that many crates."

While demand was good, business was not always smooth sailing. Operations at the sawmill came to a halt for 13 months in the early 1960s as a result of wage disputes with workers.

After it reopened, the factory was set ablaze in October 1962 and about $300,000 worth of machinery and timber were destroyed. The sawmill was later rebuilt.

The factory can trace its roots to Wallich Street in the 1930s. The late Mr Ng Boon Huay had been a partner at a sawmill factory there. He later bought over the factory when his partner moved to Malaysia.

In the 1940s, Mr Ng purchased land in Balestier where Hiap Chuan Joo operated from until the early 1980s. The factory was then moved to Kranji following the Government's acquisition of its Balestier land.

On his contribution to the memorial hall, Mr Ng Siew Hock said: "I'm happy that my interest in photography can be used to teach the younger generation about how Singapore used to be."

This article was first published on Feb 1, 2016.
Get a copy of The Straits Times or go to straitstimes.com for more stories.