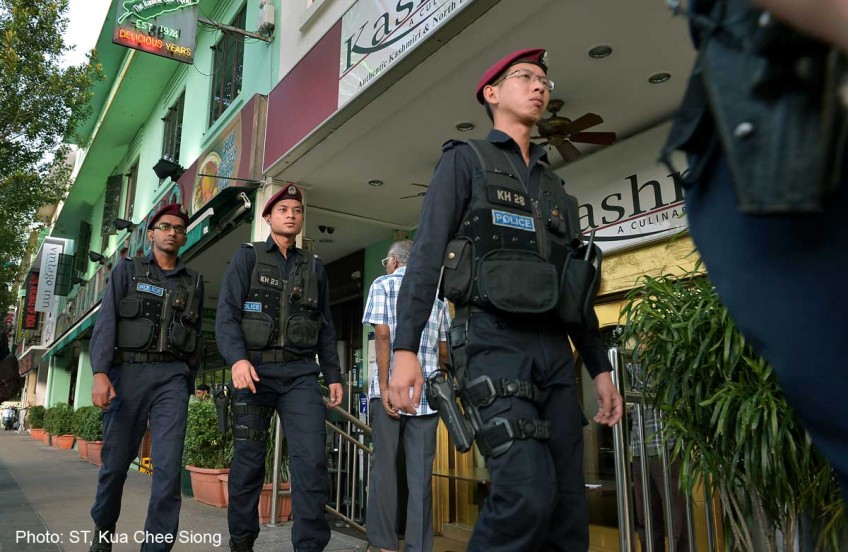 Police Special Operations Command doing their rounds of patrolling Little India as security is stepped up after Sunday's rioting in Little India.

The police in a press conference on Tuesday evening gave a chronological breakdown of what happened on Sunday night in Little India.

The police has provided a more detailed chronology of the events leading to and during the riot on Sunday night.

Read the statement from the police here:

When the situation escalated, the Police's main objective was to contain the situation and minimise any injuries to all present, particularly innocent bystanders. The use of a non-violent containment approach is among the suite of tactics and operational strategies that the Police adopts in the face of different challenges and threats.

The Police is grateful for the concern and appreciation that many members of the public have expressed for officers involved in the containment operation.

Many have asked if the Police could have used tougher measures and even deadly force on Sunday. The commanders on the ground on Sunday had decided that the appropriate strategy was containment and the officers carried out their duty and responsibility accordingly. Injuries were kept to a minimum and the situation was brought under control within two hours.

9.56pm: SCDF resource extricated deceased, construction worker Sakthivel Kumaravelu, 33, from under the rear left wheel of the bus. Mob pelted uniformed personnel and emergency vehicles with items including beer bottles, concrete blocks and drain covers. Police shielded SCDF resource from attacks so that they could continue extricating the deceased.

10.30pm: 1st SOC troop arrived at Hampshire Road. Because of congestion, they proceeded on foot to incident location at junction of Hampshire Road & Race Course Road.

12.01am: On scene investigation commenced.

12.05am: Commissioner of Police at scene.

12.39am: DPM, Second Minister, and Deputy Commissioner of Police at scene.

5.08am: On scene investigation completed. NEA began clean-up of area.