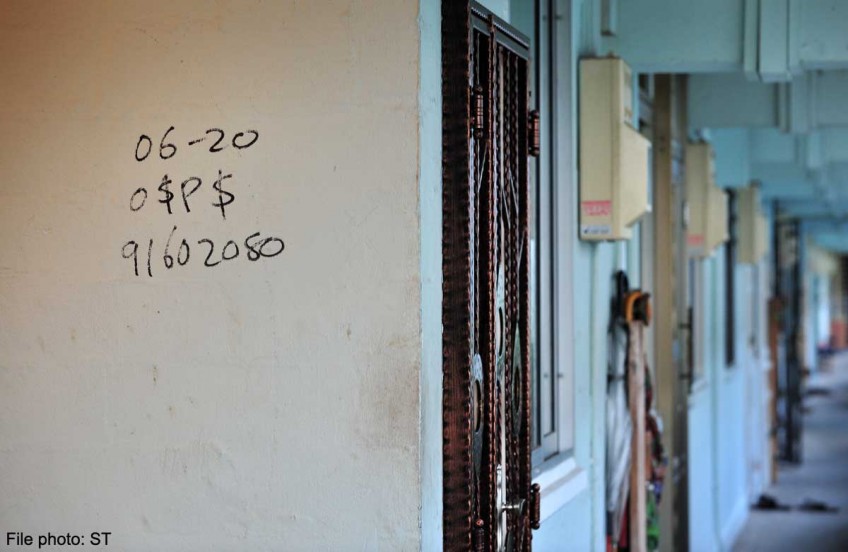 A loan-shark runner who went on a crime spree in October was sentenced to preventive detention for 12 years and ordered to be given 24 strokes of the cane yesterday.

Mohammad Faizal Ali committed 24 offences about a year after his release from seven years' corrective training plus caning for theft and robbery with hurt in 2006.

The 33-year-old admitted earlier this month to six charges of loanshark harassment, and to one each of robbery with hurt and causing hurt to a seven-year-old.

The prosecution had highlighted his serious criminal history to urge the court to sentence him to at least 12 years' preventive detention for the safety of society.

Deputy Public Prosecutor Zhou Yihong said Faizal was found to have a high risk of re-offending - with a more than 62 per cent probability of recidivism within two years of release.

DPP Zhou, who recited Faizal's past convictions since he was a teen, said: "He has spent very little time outside in the community before he re-offends. He has a propensity to re-offend and the nature of the offences tend to get more violent throughout the years."

The court heard that Faizal was found suitable for both corrective training and preventive detention, which had been called for by the judge on March 2.

Faizal tried to borrow money from a loan shark in September but was rejected. The loan shark then offered him a job as a loanshark runner and offered to pay him $100 for each unit harassed.

He agreed as he wanted to earn "fast cash" for his personal daily expenses.

He approached Norazimah Zainudin, 36, who acted as his lookout. She was sentenced to 30 months' jail in January.

A few days after the pair started work, he was offered the same job by another unlicensed moneylender known as Ah Boy. Ah Boy promised to pay him $150 for each unit harassed.

He harassed occupants in Ang Mo Kio, Yishun, Marsiling and Woodlands in October by splashing paint on their doors and defacing the walls of staircase landings with graffiti.

In the Yishun case, he locked the main gate of the unit, splashed paint and defaced a wall.

He had also robbed an Indian national of his wallet on Oct 1, after the latter had a dispute on money matters over sexual services offered by a woman. The woman called Norazimah, who in turn sought Faizal's help.