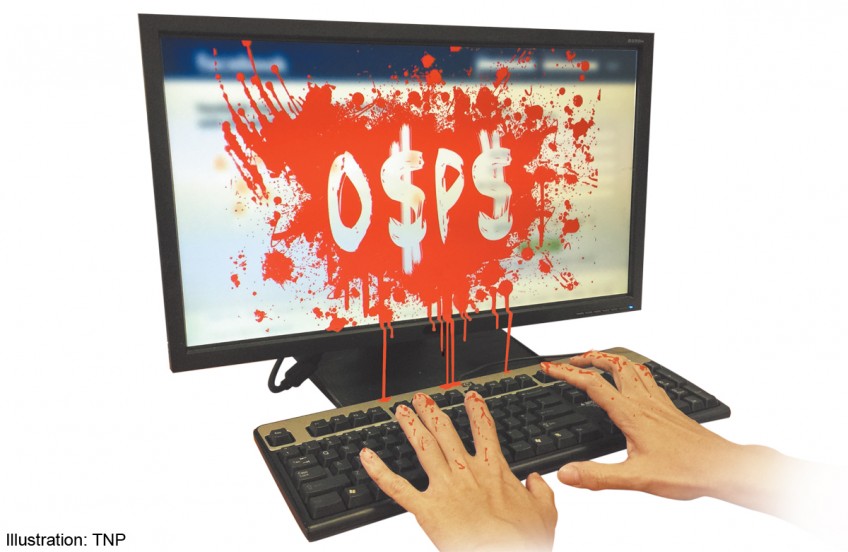 In early February, loan shark runners had threatened to lock his flat's gate and damage his front door.

This was after Brian (not his real name) refused to continue paying money to two loan sharks he had borrowed from.

Besides phone calls where their runners had hurled vulgarities at him, they harassed him by calling his colleagues at the office.

When the threatening text messages to his mobile phone stopped three weeks later, Brian, a security officer, thought the worst was over.

Unknown to him, one loan shark syndicate had followed up on its threat to cause more trouble.

Brian suspects that the syndicate had set up a Facebook account in his name and alerted close to 200 of his friends, family members and colleagues about his financial problems after befriending them online.

His family photos were also used in a few posts, with Brian's face singled out.

A post on Feb 24 warned his Facebook friends to "take note of this uncle (Brian)" who had borrowed money from his friends and cheated them.

They had also created postcards with pictures of his identity card, bordered with O$P$. They took photos of these and uploaded them onto the fake account.

There were also other posters with Brian's face on them with the threatening message, "I will never let anybody who owes me money go. I will put the postcards with your face in all your neighbours' letter boxes."

Brian suspects that the person responsible for the Facebook posts was connected to the syndicate which had verbally abused him and threatened to send a runner to his neighbour's home and his home to "lock the house" in early February.

The person had also dared him to call the police when his runner paid him a visit at night.

Said Brian, 59, who lives in the east: "When I began receiving the threats on my mobile phone, I would occasionally open my front door to see if there were unfamiliar faces lingering outside my flat. I didn't know about the online harassment because I don't have a Facebook account."

It was his son, Jim (not his real name), who alerted him to the Facebook posts.

Experts have told The New Paper that this method of shaming borrowers on social media was uncommon. (See report on right.)

Brian reported the online harassment to the police. He had previously made a report about the loan shark threats he had received in early February.

The police advised him to terminate his phone line which received on average 20 messages a day from loan sharks.

Brian had financial problems and initially borrowed from legal moneylenders. He declined to reveal the reason he was in need of cash.

When he was "stuck" with payments last November, he began getting text messages from anonymous moneylenders guaranteeing loans within 30 minutes.

Brian said. "I rolled the money I borrowed and became entangled with 10 ah longs (loan sharks)."

He said he had borrowed roughly $8,000 from illegal moneylenders whom he had never met. The sums were usually transferred to his bank account.

By last month, he claimed he had paid close to $15,000 to the loan sharks and decided to stop further payments. At that time, he owed $400 each to two illegal moneylenders.

"There was simply no end," said Brian, who decided to ignore the messages from loan sharks that appeared on his mobile phone. "I would be 10 minutes late in transferring money for the weekly payment and the next thing I know, I get a call saying I have to pay an interest over the sum I had already paid."

Jim, who is more in tune with social media, went to work to take down the Facebook post.

He called the administrator in the US and explained that a fake account had been set up in his father's name. The Facebook profile was removed two days later.

Said Jim, 26: "All along, we thought that my father was embracing 'new technology' by having a Facebook account. That's why many didn't think twice when they received 'friend' requests from him.

"It's embarrassing when old school and church friends called to ask if we had problems."

The syndicate boasted there were others who would be similarly humiliated. Brian had seen images of alleged borrowers printed on postcards which were uploaded on Facebook.

"The damage has already been done to me," said Brian. "But to others experiencing the same situation, don't be afraid to make a police report.

"It will never end if you borrow from loan sharks."

While the threats Brian had received via text messages and phone calls can be categorised as unlicensed moneylending (UML) harassment, the same classification cannot be given to the Facebook harassment.

The New Paper understands that his Facebook complaint falls under the Protection from Harassment Act (POHA) because he had claimed the content on Facebook was false.

The content accused Brian of borrowing money amounting to "10 over thousand" for his son's hospital bills. Brian said in his second police report that he had never borrowed money for that reason.

In order for any case to be classified as UML harassment, there must be a connection to the loan and the borrower.

POHA, which came into force this year, aims to provide "civil remedies and criminal sanctions" to better protect people from harassment and related anti-social behaviour, said an announcement on the Ministry of Law website.

Under the law now, harassment - committed in the physical world or online - is an offence.

So, too, is stalking. The penalties range from a maximum fine of $5,000 to a jail term not exceeding 12 months, or both.

Mr Lam Wai Mun, senior counsellor with Touch Community Services' Youth Counselling Unit, said: "We have not come across such instances. However, there are similar imposter and hate sites set up by cyber bullies to shame and attack victims."

The counsellor has come across reports where loan shark syndicates turn to using social media to recruit teenagers as runners.

Police said vandalism and property damage continue to be tactics commonly used by illegal moneylenders. But statistics show a decline in unlicensed moneylending harassment cases where damage to property was involved.

Last year, Mr S. Iswaran, Second Minister for Home Affairs, and Trade and Industry, attributed the decline to the use of technology like CCTVs and tough laws.

For someone in Brian's situation, catching the people who had been harassing him online may be tough.

Under the Protection from Harassment Act, he would need to file a Magistrate's Complaint at the State Courts.

A mediation session will likely be convened for both parties - Brian and the person who has allegedly harassed him on Facebook, said lawyer S. Balamurugan.

But Brian does not know his harassers.

Mr Lam said: "It is difficult to track and identify the actual loan shark who conducted the act... While one impersonated account can be taken down, another can always be set up easily again. Hence, it is important to deal with the root issue of borrowing money from illegal moneylenders."

Lawyer N. Kanagavijayan said the job of identifying perpetrators should be left to the police once they have been directed by the magistrates to "investigate and identify the person who had opened the Facebook account in the victim's name".