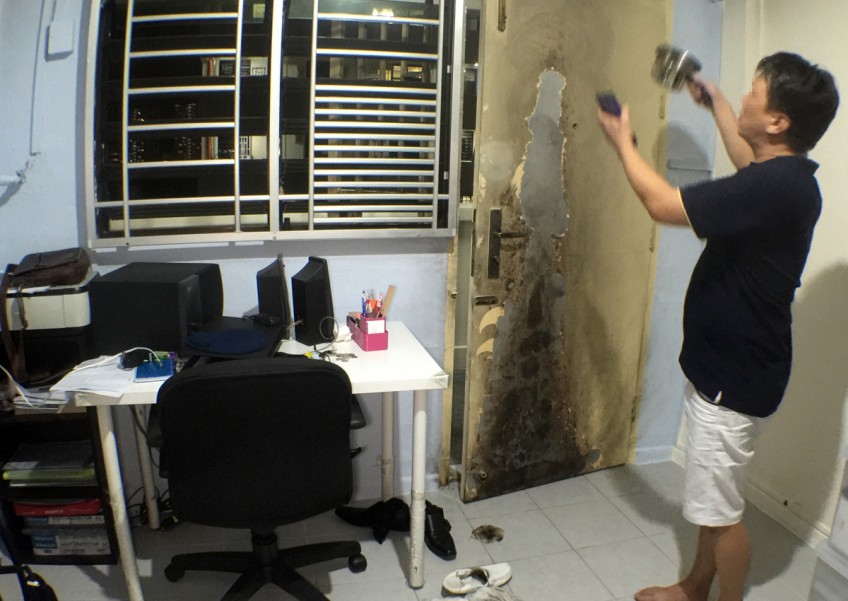 A 14-month-old child was sent to hospital for smoke inhalation when loan sharks allegedly set fire to his parents' rental flat just two weeks after moving in.

This incident happened at about 2am on Sunday at Block 59, Lengkok Bahru, Chinese newspaper Shin Min Daily News reported yesterday.

Mr Chen, a 50-year-old who works in retail, told Shin Min that he had just moved into the two-room flat with his wife and son two weeks ago.

They went to bed at about 1am that night, when there was no sign of anything unusual, but the main door was set on fire about 45 minutes later.

"I woke up with a shock when I smelt smoke and first rushed to the kitchen to check the stove before realising the smoke was coming from the door," said Mr Chen.

"My neighbour shouted for me to come put out the fire.

"Luckily, it wasn't too big so I put it out with a pan of water."

He told Chinese daily Lianhe Wanbao in a report yesterday that neighbours helped douse the flames as well.

However, his son had inhaled smoke and they sent him to hospital.

The gate and door were burnt black, and slippers left outside were melted.

Police were called to the scene.

Mr Chen discovered the word "Andy" written on the wall four times, which he believes is the name of the former owner of the flat.

Mr Chen told Wanbao that the previous flat owner owed $200 in phone bills and received many tickets for traffic violations.

His spouse is a housewife and often stays at home with his young son, and he is worried for their safety.

"I can't even focus at work. These loan sharks are very ruthless, fortunately the fire did not spread," he added.

Spooked by the encounter, he hopes to move out.

He told Wanbao that his son has just learnt how to walk.

"I'm so worried about him.

"We were lucky this time but what about next time?"

Last month, loan shark runners sent video threats of a house on fire and splashed red paint on an elderly woman's gate, locking her in with a metal chain, Wanbao reported.

Speaker of Parliament Halimah Yacob had told Wanbao then that such sinister activities carried out by loan sharks were a serious threat to life and property and would not be tolerated.