A forum contributor has written to The Straits Times to give his two cents' worth about the issues plaguing the train system in Singapore.

The contributor, Patrick Tan Siong Kuan, felt that the Land Transport Authority (LTA) and SMRT should take the blame for the disruptions that commuters have been experiencing.

"It is strange to read the excuses that the Land Transport Authority (LTA) has been giving for the shutdowns of our train system. 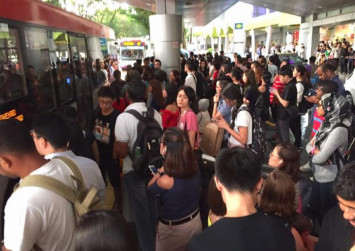 "With Saturday's flooding of the tunnel, resulting in a major shutdown of the North-South Line, it was the rain and water-pumping system's fault.

"The LTA and SMRT almost never admit that they could have been at fault. It seems that no one in the managements of LTA and SMRT have been held accountable for all these persistent problems.

"When the SMRT management team was first appointed, I was full of hope and support for them.

"Surely, if there was anyone who could do the job, a group of army generals with experience in running a most efficient fighting force should be able to do it. But I have been sorely disappointed and disillusioned.

"With the privatisation of SMRT, the management is no longer subject to public scrutiny. Operating under a shroud of secrecy, the management continues to be rewarded despite the sufferings of commuters.