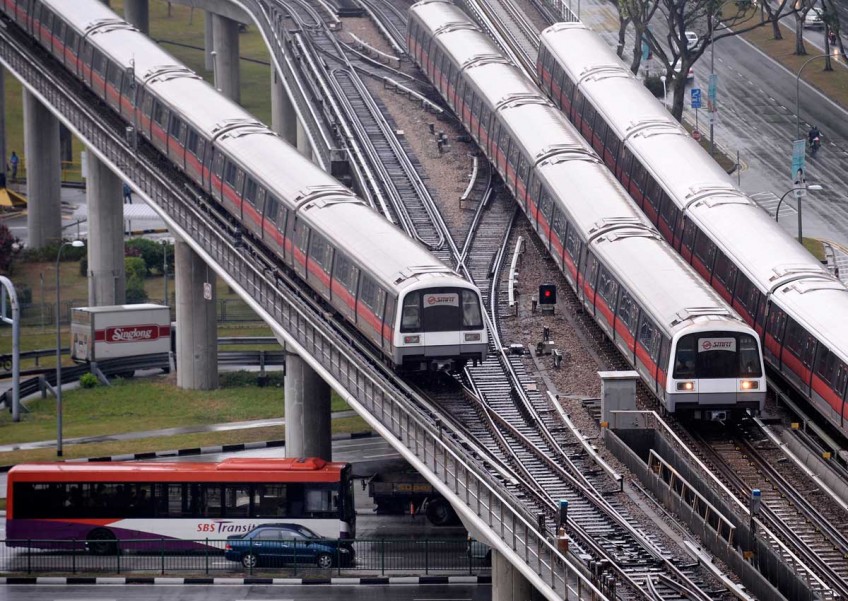 A train departs Pioneer Station on the East-West Line,
The Straits Times

SINGAPORE - The Land Transport Authority (LTA) will take over all operating assets, including trains and signalling systems from SMRT on Oct 1 this year.

In a statement, LTA said that this move to the New Rail Financing Framework (NRFF) means that SMRT will only operate the train system by paying a licensing fee to LTA. LTA said that this will allow SMRT to "better focus on the operations and maintenance of the rail network".

The rail network that will be part of the NRFF includes the North-South and East-West Lines, the Circle Line and the Bukit Panjang LRT line.

On top of allowing SMRT to focus on the operational aspect of train service, LTA said the NRFF will benefit commuters in a few key ways.

The NRFF will allow LTA to take ownership of the networks, allowing it to make timely investments in the replacement and upgrading of trains and other assets.

LTA said: "As train operators currently bear the full financial risk of operating a rail network, they may be too cautious to undertake expensive capacity expansion, replacement or upgrading works."

Furthermore, with the operating licence for operating the NRFF shortened to 15 years instead of 30-40 years, LTA said that it would be able to re-tender the operation of the rail lines more frequently, allowing the industry to be more competitive. The new licensing fee could also be increased if SMRT should experience an increase in profits.

LTA added that with the implementation of the new maintenance standards, it will be able to improve maintenance performance of the trains and rail network while ramping up its maintanence checks and audits. SMRT also plans to increase its maintanence staff by 20 per cent over the next three years.

Minister for Transport Khaw Boon Wan said in a statement that the NRFF will "achieve the twin objectives of raising rail reliability and reducing crowdedness".

Transport fares for commuters will remain unchanged after the move.

SBS Transit is still in negotiations with LTA for its North-East Line and Sengkang-Punggol LRT to also come under the NRFF.