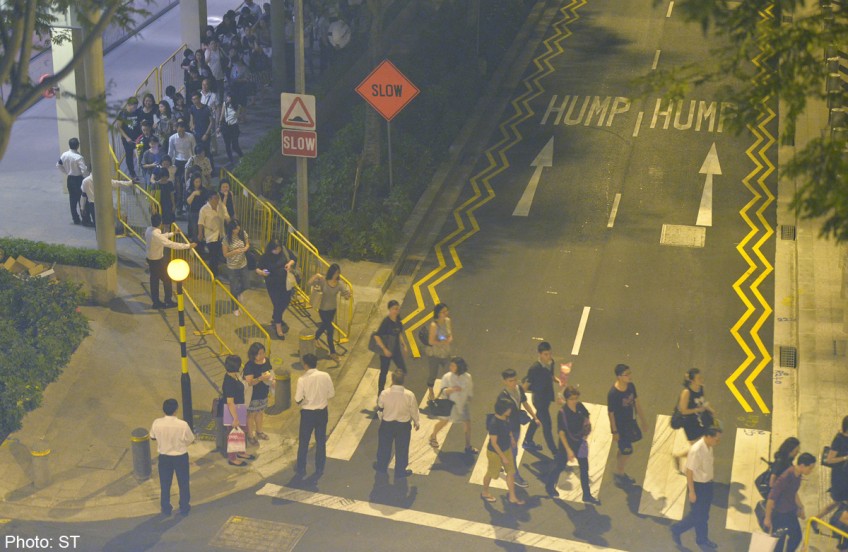 The queue to Parliament House stretching to the new Supreme Court on March 25.

SINGAPORE - Due to overwhelming response from members of the public, the lying in state at Parliament House will be open 24 hours daily from today until Saturday, Mar 28.

MRT services will also run for 24 hours on Wednesday, to allow the public to pay their respects.

The waiting time as at 10pm on March 25 was 4 hours, with more than 37,000 visitors having paid respects to Mr Lee Kuan Yew.

They are also advised not to bring along big bags like haversacks and metallic items like pens and nail files, which may slow down the process of security clearance.

Long queues have gathered since Wednesday morning outside Parliament House as residents of Singapore pay their last respects to the late Mr Lee Kuan Yew.

Mr Lee's body is lying in state after being brought from Sri Temasek to Parliament House at 10am. Large crowds had witnessed the procession that started at 9am.

A statement on the Remembering Lee Kuan Yew website has advised members of the public to note that the line to enter Parliament House begins at the riverside Promenade next to Parliament House.

As at 2pm, the public the queue stretched to about eight hours.

Ground personnel also distributed water to those waiting in line.

The Straits Times had reported that the queue went past Fullerton Hotel and OUB Plaza, reaching Boat Quay around 12pm.

The police said "security screening stations have been set up at the Promenade next to Parliament House for the Lying in State".

In a statement released at 1.15pm, the police said the queue is currently extended to Circular Road and the public are advised to exit at Clarke Quay MRT Station to join the queue for the lying in state.

Police also seek the understanding of the public to remain orderly and be patient, and to follow the directions of the marshals on the ground. Crowds inside Parliament House as at 6.15pm. Unlike earlier in the day, guards there appear to be allowing each person more time to bow and pray.LIVE BLOG: http://str.sg/JY4