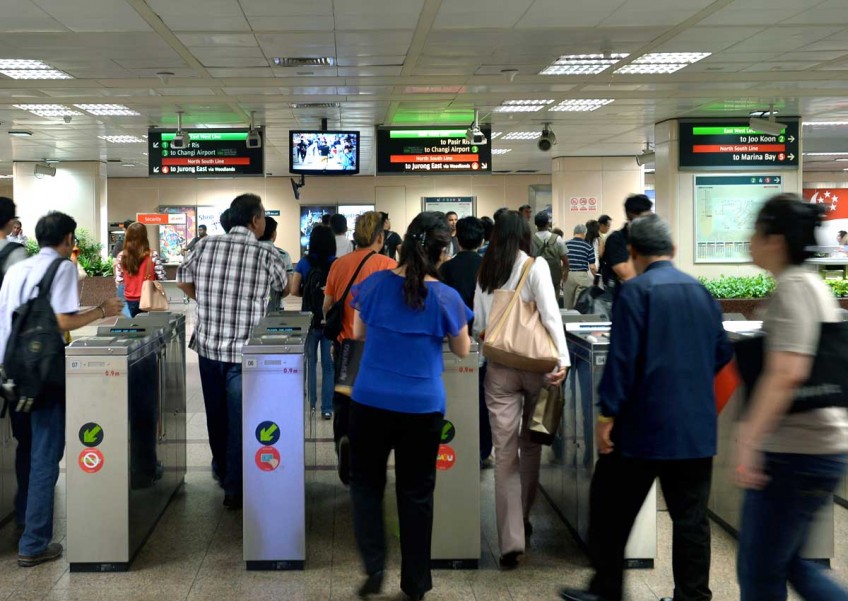 The writer believes that the argument that fares should keep pace with cost has become unconvincing, given that transport operators have had an unbroken profitability record. A better way to frame the argument would be to form a relationship between price and service quality, he says, noting that people would be more willing to pay more for better service than to pay more so that a service provider can recover its cost.
ST file photo

Mr Khaw said it was not sustainable for taxpayers to keep on subsidising the cost of operating Singapore's public transport system. He said that over the next five years, the Government expects to subsidise bus services by almost $4 billion. It expects to spend another $4 billion or so replacing ageing rail assets in the same timeframe.

"And all this is on top of about $20 billion we will be spending to build new public transport infrastructure," he added.

Mr Khaw said the Public Transport Council (PTC) will review the fare formula when it expires later this year.

"They will consult widely," he said. "I am confident that they will decide wisely."

To say that fares should keep pace with cost will not go down well with commuters, even if it may be perfectly legitimate economically.

The argument is an old one, and has been relied on for practically all the fare revisions in the past. Unfortunately, it has become unconvincing, given that operators have had an unbroken profitability record.

True, running a bus operation on its own has occasionally been unprofitable. But if ancillary activities such as advertising, rental and engineering are included, both the incumbent transport companies have been in the black.

Taken as a whole (as it should be), with other core businesses such as rail, taxis and chartering, SMRT's after-tax margins have ranged from 5 to 19 per cent in the last decade, while equivalent margins at ComfortDelGro have hovered around 7.5 per cent in the same timeframe. Also, when the fare formula was last reviewed in 2013, an energy component was introduced to better reflect costs faced by operators.

So, how should the formula be further tweaked so that commuters share the cost of running a public transport system with taxpayers? The question is trickier because, as Minister Khaw pointed out in his speech three weeks ago, "commuters are taxpayers too".

Before we attempt to answer that question, we should ask a more basic one: Should taxpayers subsidise public transport?

And the answer to that is clearly "yes". Public transport is a costly business because of the enormous infrastructural and operating assets involved.

It is an inherently cost-inefficient business too, because in catering to peak demand, there is a lot of underutilisation during off-peak hours. For instance, average bus occupancy throughout the day is merely 20 per cent, even if buses are packed in the morning rush hour. Yet, because public transport is also the most efficient way of moving the masses, it has to be affordable to the masses. So, the Government - or more rightly, taxpayers - have to pick up the slack.

In the recent overhaul of the bus industry, and the move to transform the rail sector, policymakers have deemed it necessary for the Government to assume a more active and direct role in making public transport the choice mode among Singapore residents.

This entails beefing up the bus and train fleets quickly, assuming ownership of all fixed and operating assets and ensuring their timely renewal, and regulating a more competitive environment. For this, it will have to dip more into the public coffers.

Without a doubt, questions will now be raised on whether tax revenue - of which vehicular taxes alone account for some $9 billion a year - is not already sufficient for such an endeavour.

Attempting to answer that will invite more questions on how government funds are apportioned, and even whether certain ministries can curtail their spending. It would be a futile exercise, and one which might be encouraged if the Government hangs on to its "costs are rising, so must fares" argument.

A better way to frame the argument would be to form a relationship between price and service quality. People would be more willing to pay more for better service than to pay more so that a service provider can recover its cost. That is just intuitive.

A 2011 study by American Express reaffirms this. It found that 73 per cent of people were willing to pay more for good service.

But what is good service? In the public transport sphere, that is relatively easier to quantify. There are a number of measurements to gauge service standards, such as reliability, punctuality and comfort level in the rail network.

A new real-time tracking system for buses will soon allow the authorities to do likewise for buses. These figures should be audited and published.

If the PTC can tweak its formula to include a service-quality component, it will have a more persuasive tool to convince commuters why they should pay more (or not). It will also be a more effective tool to ensure the regulators do a proper job of maintaining or even raising service standards.

Now that the Government collects bus fare revenue, it is even more important for the PTC to be seen as unbiased, and not as an extension of a government body.

Ideally, the Land Transport Authority's (LTA's) regulatory role should be transferred to the PTC. Right now, the LTA is responsible for awarding bus contracts, collecting fares and regulating service standards. That is not ideal, even if the conflicting roles are taken care of by different departments. Hopefully, all these structural anomalies can be addressed by the time the new fare formula is put to paper.