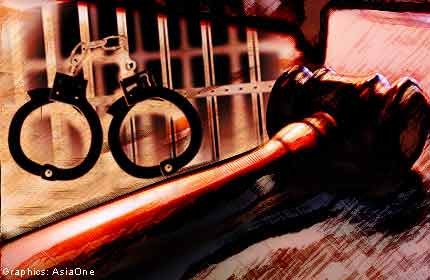 KUALA LUMPUR - A suspended police corporal pleaded not guilty in the Sessions Court to wilfully releasing a Nigerian detainee to escape from the Jinjang lock-up.

Kpl M. Ealumalai, 52, was accused of releasing detainee Osuji Kelly Prince who had been arrested for a drug trafficking case.

He was said to have committed the offence with another person who is still at large at the Jinjang lock-up in Sentul between 9.30am and 10.46am on Aug 12.

If convicted, Ealumalai can be jailed up to seven years and fined under Section 225(c) of the Penal Code.

Ealumalai, who was attached to the Jinjang lock-up, was composed upon hearing his charge.

DPP Suzanne Tiyon Bimen did not offer any bail, saying that the offence was serious.

Pleading for bail, his lawyer G. Ganeson said the court had the discretion to grant bail for non-bailable offence and impose additional conditions for his client's release.

Ganeson said the prosecution had failed to show any evidence that his client would tamper with witnesses or would abscond or prepare a false defence to affect their case.

Ealumalai was involved in a serious accident in 2010 where he suffered a head concussion and was still taking medication, he said.

"Last year, he was involved in a motorcycle accident where he injured his backbone," he added.

In reply, DPP Suzanne said that the accused has failed to provide proof in terms of documentation to support his claims over his illness and treatments.

The accused, who was reported to have served the police force for 32 years, was later taken to the Sungai Buloh prison pending the next court proceedings.