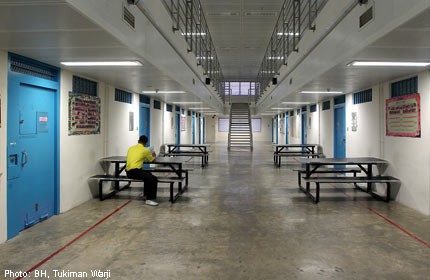 KUALA LUMPUR - A police corporal, who has 32 years' service in the force, was arrested for helping a foreigner escape from detention.

Osuji had been detained since Aug 1 for drug possession.

"His action will not be tolerated and I will see to it that he is charged as soon as possible," SAC Ku told a press conference at the city police contingent headquarters yesterday.

According to SAC Ku, the corporal had been investigated for improper conduct and transferred to various stations a number of times.

He did not go into detail on how Osuji's escape was carried out, and said the details would be read out in court.

"We have witnesses from personnel there and we are also investigating if procedures were followed," SAC Ku said, adding that the case would be investigated under Section 225 of the Penal Code, which carries a seven-year jail term upon conviction.

There have been a number of incidences of detainees escaping from custody in recent times.

On June 6 last year, a 26-year-old suspect broke out from the Ulu Choh police station in Nusajaya by smashing through the ceiling and wriggling out of the roof.

On Jan 7, seven remand prisoners threw chilli powder at four escort policemen before dumping them near the Butterworth Outer Ring Road toll plaza in Bagan Ajam while being transported to court.

On Jan 22, a prisoner from Penor Jail in Kuantan bolted while on work detail outside the prison premises. He was detained eight hours after his escape.

On July 10, a 32-year-old suspect placed in the rear seat of a police patrol car in Kamunting, Perak, pushed out the policeman who was about to start the engine and sped off.

On July 16, drug case suspect Abdul Rashid Abdul Rahman, 61, fled the magistrate's court in George Town by impersonating another detainee who was to be released. The other detainee was sleeping in another room and did not hear his name being called.