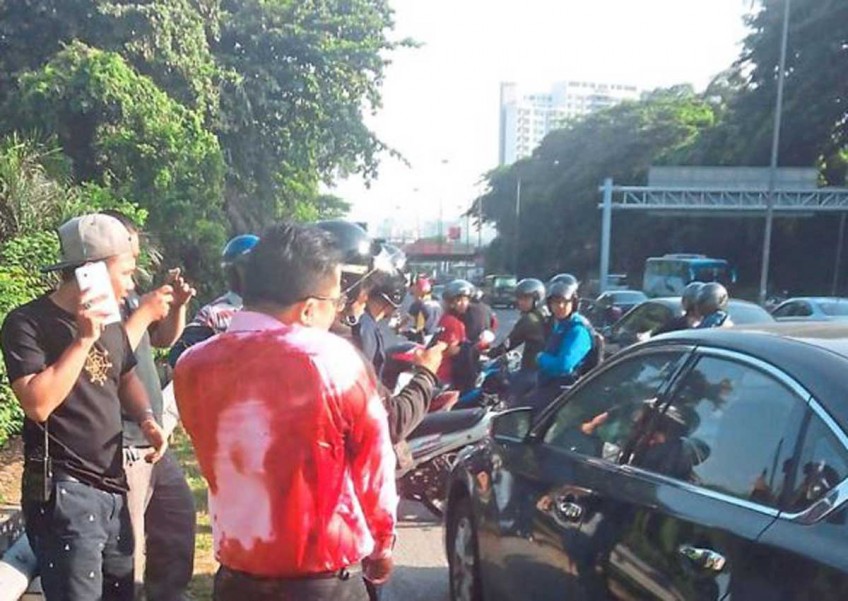 The bloodied victim waiting for medical help after he managed to climb out of his car.
The Star/ANN

PETALING JAYA: A 40-year-old general manager survived a shooting by a passing motorcyclist on the KL-Seremban highway.

City police chief Comm Datuk Amar Singh said the victim was on his way to his office in Damansara when he was shot at 8.45am.

Police believe that two men on a motorcycle approached the car, while the victim was driving along the highway, and opened fire.

"There were four shots from the right side and two from the left side of the car. He sustained five gun shot injuries, two on his right hand, one on the chest and two on the neck," said Comm Datuk Amar.

The victim has been sent to Pusat Perubatan Universiti Kebangsaan Malaysia (PPUKM) in Cheras for treatment and is in a stable condition.

It is believed that the victim had earlier lodged a police report after receiving death threats over a relationship with a woman who was involved in a divorce proceeding.

In another incident in Subang, police gunned down the prime suspect in the shooting of two brothers at a traffic light junction along Jalan Besar Sunway, Batu Caves, more than a week ago.

The ex-convict was shot dead in a stolen car parked in front of a house along USJ 11/1D here at about 12.10pm yesterday.

He has five previous records for drug-related offences and intentionally causing hurt using a dangerous weapon.

The 37-year-old man was also previously arrested under the Emergency Ordinance.

Selangor deputy police chief Deputy Comm Datuk Abd Rahim Jaafar said the suspect was napping in his car when members of the public informed police of the suspicious vehicle.

"The police approached the car and showed the suspect their identification cards.

"The suspect took out his pistol, forcing police to open fire in self-defence," he said.

DCP Abd Rahim said police found three bullets loaded in the suspect's gun, in addition to clothes and food in the car, which was reported stolen in Kepong.