Commuters leave the Woodlands Causeway across to Singapore from Johor, hours before Malaysia imposes a lockdown on travel due to the coronavirus outbreak, in Singapore, March 17, 2020.

PETALING JAYA - Since the imposition of the movement control order (MCO) on Wednesday (March 18), some Malaysian workers in Singapore have resorted to sleeping outside an MRT station, reports Today Online.

Storekeeper Armel Sharil, 31, said that he waited until the metal gates of the Kranji MRT Station closed at 1am before laying down a cardboard on the floor to sleep on.

"I'll wake up at about 5am, around the time the station opens," he was quoted as saying by the Singaporean news portal.

He said his employer was still looking for accommodation for him.

Armel, who did not have time to pack his belongings, only had his wallet, a phone with no Internet access, a portable charger, a small tub of hair wax and mouthwash that he just bought.

"I'm going to continue working here even if the lockdown is extended because I need to feed my family back home."

"I'm so tired but I can't sleep because I really miss them," he said.

Armel was one of about 20 Malaysians who spent Wednesday (March 18) night around the station.

The MCO, which bars Malaysians from leaving the country from March 18 to March 31 and foreigners from entering at all its borders, sparked a rush across the causeway.

The Kranji MRT station is one of the main stops for people who are travelling in and out of Singapore to Johor Baru.

The portal reported that a pair of officers from the Public Transport Security Command (TransCom) - a unit under the Singapore Police Force - had woken the workers up one by one to ask for details while two groups of Singaporeans were seen handing out sleeping bags, water and snacks.

There were also policemen patrolling the area and doing random checks. 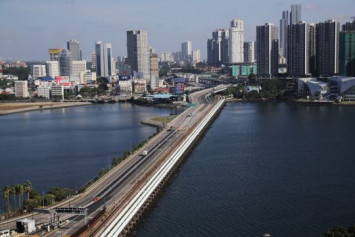 On Tuesday (March 17), Manpower Minister Josephine Teo announced at a multi-ministry Covid-19 taskforce briefing that the Singapore government would be supporting employers who had to find accommodation for their Malaysian workers, by giving them $50 for each worker a day.

The portal also said 20 hostels and budget hotels were virtually fully booked until the end of the month, after getting calls from Malaysian workers or their Singapore employers seeking temporary accommodation.

A dishwasher Sarala, 36, said that she chose to sleep at the station because she was familiar with the faces of the people who commuted daily from Johor Baru to Singapore.

"The station is quiet at night so it's peaceful to sleep here. The other Malaysians who sleep here are also people I've seen before," she said, adding that the toilet at the station in the morning was very crowded when she went to wash up for work in the morning.

Another worker who wanted to be known as Chandra, 49, said they had no choice but to sleep there until they found a place to stay.

The mother-of-four, who works as a cleaner, had to shower in the morning at her workplace - an office located in Pioneer near Tuas.

For the workers sleeping near Kranji MRT Station, it appears that their employers have not promised them accommodation,...

Putting up with these inconveniences is not a big issue for them, as they are thankful to still have their jobs.

However, this was not the case for 25-year-old Mohana Ambigai Dewi.

The school cleaner was terminated on Wednesday when she failed to turn up for work at noon on Tuesday.

"The traffic jam at the Causeway was too long. My phone battery died so I could not call my boss to tell him that I could not go to work."

"When I turned up this morning (on Wednesday) to explain my situation, he just told me that the company has cancelled my work permit, " she said.