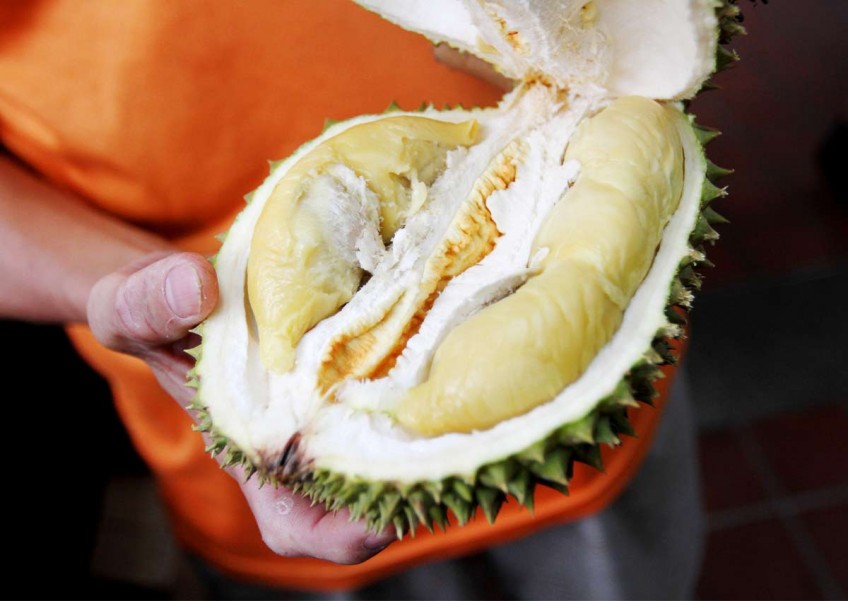 A drought in Malaysia has led to a rise in durian prices, with some sellers here charging over $10 a kilogram more than they were a year ago.

June and July usually form the peak season for the "king of fruits" but the dry weather has decimated crops, and peak season is now expected to be delayed until the end of this month.

"We have durian plantations in Johor and Pahang, where there has been a decrease in harvest by more than half," said Alvin Teo, 30, owner of Fruits Top 1 Department Store.

He is selling 1kg of Mao Shan Wang for $27, up from $16 last year. Despite the price increase, customers still buy and he sells out his stock every day.

Mr Teo hopes that supply will return to peak level and that prices will return to normal but added: "We have to see the bumper harvest this year first."

Alun Zhou, owner of 101 Fruits, said there was also a dry spell in March and April.

"It takes 90 to 120 days for one cycle of harvest. With no water, even if there is sunshine, the land will be dry and not fertile," he noted.

According to Mr Zhou, who has been in the business for 40 years, local durian sellers also face competition as suppliers also cater to other markets in the region.

He added that regular customers now buy smaller amounts, just to try the taste of the fruit.

Prices at Combat Durian in Balestier Road are the highest in five years.

Owner Linda Ang said: "Usually, the bumper crop is in July. But Malaysia had the drought so the harvesting is delayed."

She sells Mao Shan Wang at $28 per kilogram.

"Some customers are filled with disappointment while some don't mind. They crave for it, they pay for it."

While there are alternative sources such as Thailand, Madam Ang brings in durians only from Malaysia as the Thai ones were affected by the droughts too.

Administrator Linda Yeo said her family loves the fruit and she is willing to fork out the extra dollars if the taste is good.

"We will buy regardless of the price. We are really more concerned about the quality of the fruit."