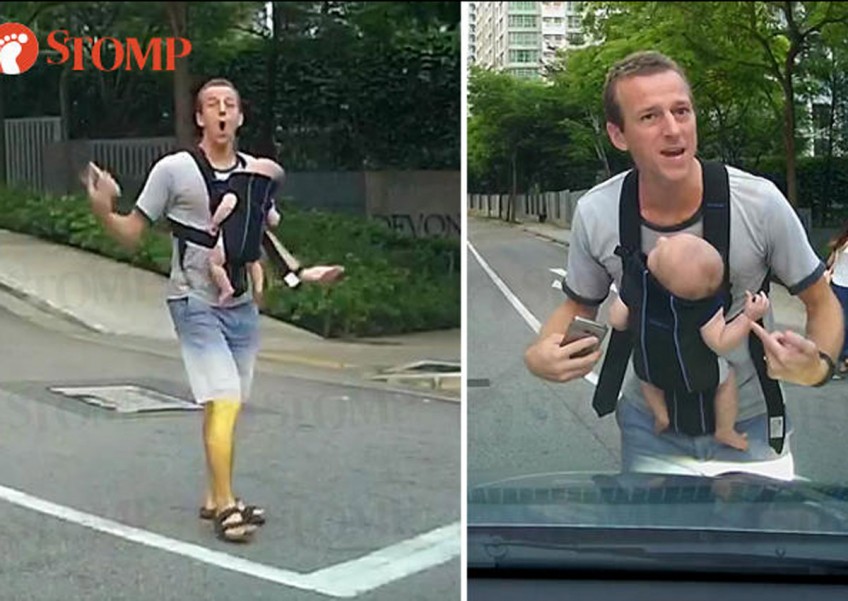 A man who had a baby strapped to him was caught on camera crossing the road in a reckless manner -- then losing his temper at a driver that had stopped to let him pass.

The incident occurred last Saturday (Aug 19) at around 6.45pm, along St Thomas Walk.

Stomp contributor Amazing, the driver in the incident, sent Stomp a video clip showing what transpired that evening.

In the footage, the man can be seen crossing the road with a baby strapped to him.

He then gestured for Stomp contributor Amazing to stop, while calling for a woman and a boy riding a kid's scooter (presumably his family) who were trailing behind. The woman was pushing a baby stroller.

The Stomp contributor said in a phone interview: "The man shouted at his wife to the cross the road."

Amazing added that at this point, he shook his head at the man's behaviour -- which the latter saw and made him flare up.

"I was more than happy to let him pass, but he flew into a rage and blocked my vehicle's passage with the baby strapped to him when I shook my head at his reckless act.

"He kept saying he had the right to cross (the road) because he had a baby with him. Does he think his baby is his shield?

"He also came to the driver's side and continued shouting, but I drove off," said Amazing.

According to the Stomp contributor, he only shook his head but did not honk at the man. He also did not engage in an argument by responding.