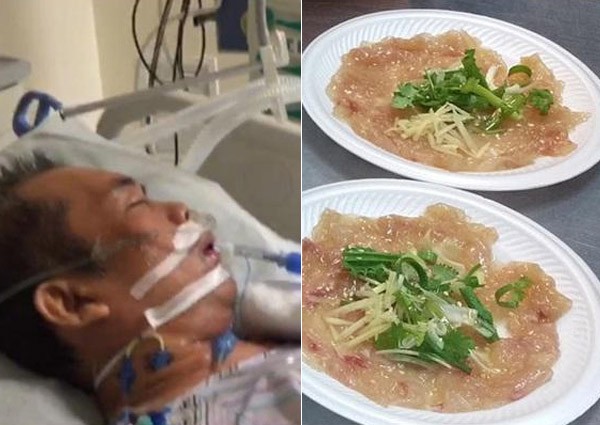 Days after he had a raw fish dish, salesman Sim Tharn Chun began vomiting and having diarrhoea. He was later taken to the hospital on the brink of unconsciousness and is said to be suffering from meningitis.

His wife keeps vigil by his hospital bed, hoping that he will wake from his coma and celebrate their 20th wedding anniversary next month together.

Mr Sim, 52, had gone to a food centre in the central region with his wife Madam Sim, 43, on Nov 15 for a bowl of yusheng-style raw fish porridge.

Last Thursday, he was rushed to Khoo Teck Puat Hospital after his legs swelled up and he almost lost consciousness.

Madam Sim told Chinese daily Lianhe Wanbao in a report yesterday: "On Friday morning, the doctor transferred him to the intensive care unit and ran blood tests on him, which confirmed that he was infected by Group B Streptococcus (GBS) bacteria, which led to meningitis."

She said that her husband loved yusheng but had stopped eating it after news reports were published in July of people being hospitalised due to suspected GBS infection from eating yusheng.

From July to September, there were several cases of GBS-related infections, including one of a man who had his hands and legs amputated, according to news reports.

In August, the Ministry of Health (MOH) said its investigation found only an association between GBS infection and the consumption of "yusheng-style" raw fish sold at food stalls.

MOH also said then that there was a "significant downtrend" in the number of GBS cases since the middle of July, when licensed foodshop and food stall holders were advised to stop selling raw fish dishes using Song fish and Toman fish.

Said Madam Sim: "The number of yusheng-related cases had died down, so that day when my husband saw the long queue at the food centre (for the dish), he had a bowl."

The boss of the yusheng porridge stall that Mr Sim patronised, who gave his name only as Mr Wu, told Wanbao there were no incidents of GBS infections linked to the stall in the past 20 years.

He added that he sells only fresh fish that he receives daily from a supplier and has always been strict about cleanliness. The fish are handled with gloves at the stall.

Regular customers have supported him. One of them, retiree Mr Lu, said he has been eating yusheng porridge from the stall daily for several years without incident.

GBS is a common bacteria found in the gut and urinary tract. However, it may occasionally cause infections of the bloodstream, skin and soft tissues, joints, lungs and brain.

He advised diners to make sure that the stallholders are wearing gloves. Those with weak digestive systems should consider eating cooked fish.

Liu Zhihua, a doctor, told Wanbao that it is relatively rare to get meningitis from a GBS infection but it could potentially lead to paralysis of one side of the body.