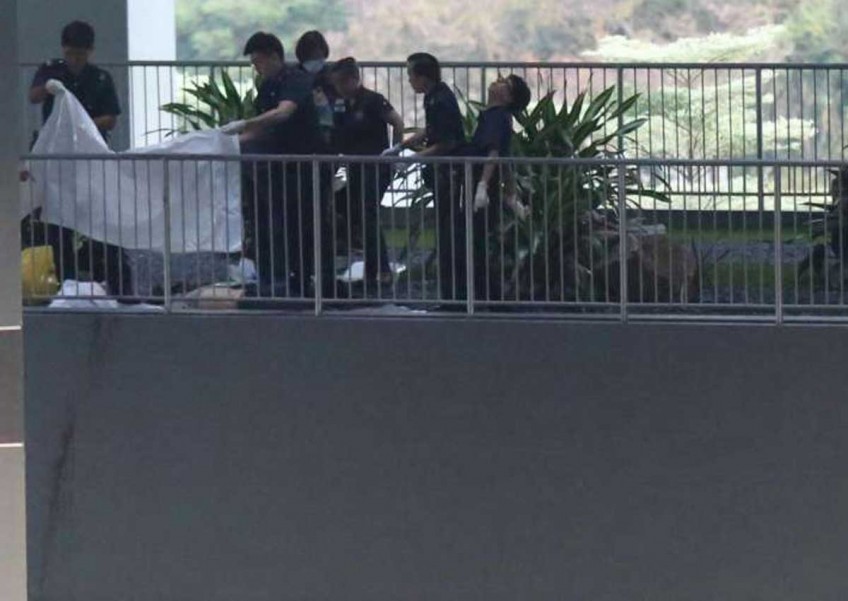 A Vietnamese man died after falling down from the 15th storey of Hotel Boss on March 29, 2017.
Lianhe Wanbao

A Malaysian businessman staying at Hotel Boss in Jalan Sultan was woken up from his sleep early yesterday morning by the commotion in a room nearby.

Although it lasted about half-an-hour, he did not think it was anything serious and went back to sleep.

He was blissfully unaware of the drama that developed as he slept.

A Vietnamese man, Mr Nguyen Ngoc Duy, 23, fell from height and was decapitated.

His body was found in a drain at the hotel's sky garden on the fifth storey, while his head was found just outside a restaurant on the fourth storey.

Another man, 21-year-old Vu Truong An, had a slash wound on his cheek.

He was taken conscious to Tan Tock Seng Hospital.

Both men were on a staycation at the hotel.

They were staying on the 15th storey.

The Malaysian businessman, who gave his name only as Mr Chong, told The New Paper he had heard someone banging on the door of a room on the 15th storey at about 2am.

Soon after, he heard the commotion.

The 46-year-old country manager said: "A man was also shouting, but I could not understand what he was talking about."

He only found out what had happened when TNP approached him yesterday afternoon, and he was surprised to hear that someone had died.

"I initially thought it was just a heavy drinker creating trouble," he said.

The floor and wall were also covered with blood, he added.

Lianhe Wanbao also reported that Mr Duy was on a short-term visit pass and was supposed to return to Vietnam at the end of this month.

The hotel room had been booked by Mr An, an Institute of Technical Education student, and he had invited five friends, including the dead man, for a staycation, the daily reported.

Mr Duy's body was taken away at 8am, and police investigations are ongoing.

This article was first published on March 30, 2017.
Get The New Paper for more stories.