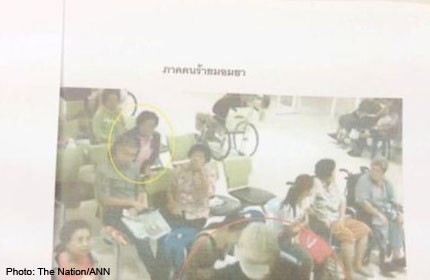 Picture taken by security cameras show the suspect, in red circle, who drugged and robbed a 69-year-old woman at Bangkok.

THAILAND - Police will issue an arrest warrant tomorrow for a male suspect who allegedly drugged and robbed a 69-year-old woman at Bangkok's Ramathibodi Hospital, before fleeing with her Bt12,000 (S$477) cell phone and Bt2,000 in cash on October 4.

Phayathai superintendent Pol Col Saman Rodkamnerd yesterday said the recent assault and robbery was similar to an incident on March 20 at Priest Hospital, but he could not yet confirmed if it was the same culprit.

The Ramathibodi attacker, who was captured in security camera footage, is approximately 160cm-tall and was wearing a long-sleeve black shirt and jeans at the time of the assault. His nose and mouth were also covered.

Phayathai police investigations have discovered that the culprit used the colourless and odourless sedative Xylazine - generally used by veterinarians for sedating and anaesthetising animals. There is a high risk of overdose and death, if wrongly administered to humans, Saman said.

Police will distribute the suspect's pictures to some 10 hospitals in the area today, after the warrant is issued, he said.

Ramathibodi Hospital has issued an announcement to warn patients and their relatives that there is a gang at large pretending to be medical staff, but intent of stealing their valuables. They are urged not to receive food or water from any strangers, and not to leave their food and drink unattended.

On Friday, Phayathai police investigator Pol Lt-Colonel Banyong Dammankong said that since the beginning of the month, at least three people had reported being robbed in this way at three hospitals: Ramathibodi, Priest and Rajavithi.

According to the Food and Drug Administration, Xylazine is registered and classified as a dangerous medicine. People are allowed to buy the drug without a doctor's prescription, as it is intended for non-human use.

In humans, anyone taking the drug would become sleepy and develop a change in blood pressure. Affected people would breathe slowly and have high a level of sugar in their blood, as well as a very dry mouth, according to the FDA.