A man of exceptional intellect and perception 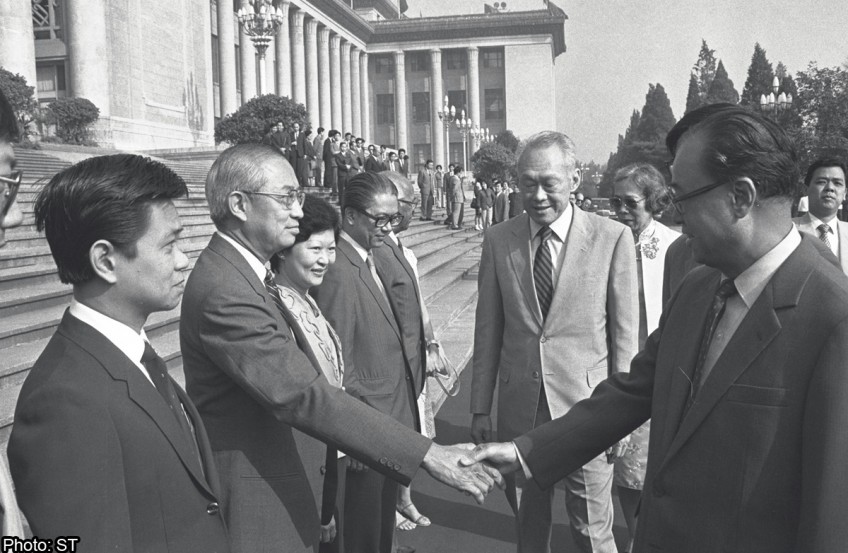 IN THE lead-up to the 1984 General Election, after I finally agreed to enter politics, Kuan Yew invited me to his office at the Istana.

It was a spartan room, which reflected the character of the man. He did not believe in spending money unless it was absolutely necessary. The room was just plain, except for some books.

In the Cabinet room, one floor below his office, the table has been there for as long as I remember.

The cloth covers of the armchairs were finally changed three or four years before he retired. He had previously refused to.

It got to a point where his colleagues were embarrassed that visitors might think the Singapore Government had no money. But to him, these things mattered little.

His primary interest was in making sure the economy grew and the people benefited.

Kuan Yew was relaxed in that first meeting. He wanted to allay any lingering concerns I had about entering politics and to make me feel comfortable about taking the leap.

That meeting marked the beginning of a friendship that lasted three decades, including 17 years as Cabinet colleagues.

I had heard a lot about Kuan Yew before that, of course, but from actually interacting with him, I found him to be a man of exceptional intellect and perception.

He had what I would call helicopter qualities - the ability to rise above the masses and look at things from a higher perspective, to not get confused by the forest.

As a lawyer, he had not received formal training in economic and financial matters. But he more than made up for it with an acute mind with the ability to calculate implications, as well as by reading widely.

He also had a strong intuitive sense on the principles of macroeconomics and how nations moved up. He agreed with Dr Goh Keng Swee early on that it was important to have an open economy that attracted the investments of multinational corporations.

Later on, he could see that low-cost countries were moving up, and I consequently worked with him to grow our services sector in order to stay competitive - financial, legal, business services and so on.

He had a vision of how Singapore was going to create jobs and stay one step ahead of other developing countries and he was not afraid to try different strategies. They turned out to be extremely successful.

After I entered politics, Kuan Yew and I would meet regularly for one-on-one lunches. He had simple eating habits.

There would be soup - usually vegetable soup - followed by fish or steak.

He loved a good steak - about 120g, lean with all the fat cut out. Finally, there would be fruit. He was convinced about the benefits of antioxidants in fruit.

His favourite fruit was pomelo and he would say to me: "You eat it too. It's good for you."

He was a health nut. He would swim or cycle daily and kept telling me during our lunches that I should be exercising to keep fit, so I would last longer.

In this environment, he was quite friendly. We would discuss the issues of the day: policy matters, primarily financial ones, as well as international developments.

One thing he did not discuss with me, though, was domestic or electoral politics.

He discussed this with other ministers because he knew this is not my area. I was never much interested in politics in the partisan or electoral sense. He understood that and kept me out of it.

Other than these one-on-one lunch meetings, our discussions mainly took place during Cabinet meetings and during the annual Budget meeting between the Finance Minister (after I took up this portfolio in 1985) and the Prime Minister.

I would prepare a paper laying out the important tax changes in the Budget. Because tax issues were very sensitive, we did not want to discuss them openly, even at the Cabinet level.

For example, if we were going to increase petrol or tobacco taxes, any leak would be very problematic.

The role of Finance Minister in Singapore is relatively straightforward, unlike in other countries where finance ministers have to fight with central bankers because one side wants to spend and the other side wants to control.

Because the issues were less complicated, Kuan Yew and I rarely found ourselves in disagreement or having to debate an issue very vigorously, except on one issue: whether we should internationalise the Singapore dollar.

This debate happened in the 1980s. The big international banks at the time wanted greater access to the Singapore dollar, which they saw as a strong and stable currency - almost as strong as the US dollar and more familiar to people in this region.

They proposed to Kuan Yew to allow the Singapore dollar to be borrowed for use in large amounts outside Singapore - say, to fund Indonesian development projects.

A few years before this, these banks proposed that a US-dollar offshore market be established in Singapore.

We allowed this and it worked very well. It was the first step in our move towards developing Singapore as a financial centre.

Those banks saw the internationalisation of the Singapore dollar as the logical next step.

As chairman of the Monetary Authority of Singapore, I, together with the MAS leadership, was totally opposed to this proposal.

We felt that once borrowing outside Singapore was allowed, there would be pressure on the mint to print more money, in excess to the GDP requirements in Singapore.

Over time, if more and more foreign entities held large quantities of Singapore dollars offshore, a mischievous speculator with enough resources would, in theory, be able to undermine your currency by selling down and then buying back.

This was in fact what happened to the British pound at one point and, later, to the Thai baht during the 1997 financial crisis.

Keng Swee, who had retired, supported my view on this issue. But it took a lot to bring Kuan Yew round. He asked if we could allow some internationalisation to happen initially, and then to gradually build up.

I maintained that once you opened the door, it was difficult to stop it.

There was a lot of to-ing and fro-ing between the two of us. He was a night burner who worked into the wee hours of the morning.

Often, he would think nothing of calling me up at midnight to ask me about a particular detail or to get me to elaborate on a certain point.

In the end, we were able to convince him that Singapore could become a financial centre without internationalising our currency - by developing other financial services in parallel that could provide just as good benefits, if not better.

What I learnt from this exchange about Kuan Yew was that he could be persuaded. On many issues, he had strong views and would try to dominate.

Often, I saw him challenge proposals put forward by ministers at Cabinet meetings. But he was never so locked in to a particular view that he could not change his mind.