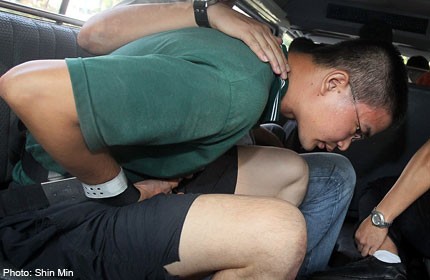 Unaware that her husband had lost his job as an administrative assistant, Ms Tang Shifang slapped him for playing computer games at home.

He was furious and responded with punches and kicks. The protracted fight left her with multiple injuries including collapsed lungs and a ruptured kidney, and resulted in her death.

On Friday, her husband Lee Show Fui was sentenced to five years in jail, after pleading guilty to culpable homicide not amounting to murder. The 33-year-old waved at his mother in the public gallery before being led away.

Handing down the punishment in the High Court, Justice Woo Bih Li considered Ms Tang's provocation, and an offer the man - who has schizophrenia - made to call an ambulance when he realised his wife was badly injured.

But the judge lectured him: "Do you see the unfortunate circumstances? One life is lost, and you have to go to prison... No one should be entitled to think he can retaliate with violence just because his wife started an altercation." The couple, who had a history of violent quarrels, both knew martial arts techniques.

Their fight on Aug 31, 2011 began with Lee oversleeping. Thinking he would be late for work, his wife pulled his ear and scolded him.

When the 37-year-old food court assistant later saw him at the computer and slapped him on the cheek, he punched and kicked at her, the court heard on Friday.

He apologised to his wife and left home, but later returned to confront her for "bullying" him.

Noticing she was injured after knocking her to the ground three times in the fight that followed, Lee offered medical help but she instead tried to poke him in the eyes, the court heard.

Lee later untied her and removed the tape. He twice offered to call an ambulance. He also cooked for her. She refused his offers of medical attention and food. Lee returned to his game, and realised only after the session his China-born wife had stopped moving.

Asking for five to six years in jail, Deputy Public Prosecutor Eunice Ng said Lee had been the "more dominant fighter", citing the numerous injuries Ms Tang had suffered. She added that Lee had not suffered any injuries.

But pleading for leniency and three to five years' jail, Lee's lawyer Singa Retnam said the man, who has two young children, was capable of rational behaviour.

The maximum penalty for culpable homicide not amounting to murder is life imprisonment or a jail term of up to 20 years, plus caning or a fine.